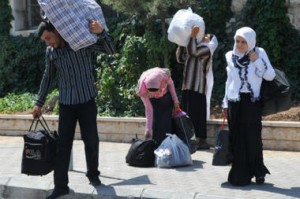 Beirut, Lebanon-  Rebels pressed their guerrilla fight to topple Syria’s regime deeper into the capital on Friday, ambushing troops and attacking police stations as thousands of terrified civilians fled to Lebanon and Iraq to escape some of the worst violence of the 16-month conflict.

The two-day death toll was more than 470 people, marking some of the deadliest of the uprising.

The U.N. refugee agency said between 8,500 and 30,000 Syrians had entered Lebanon in the past 48 hours, and thousands of Iraqis have also returned home, a bitter trip for many who fled to Syria from their own country’s civil war.

But rebels said they withdrew to expand their guerrilla war, pointing to the difficulty both sides will have in achieving victory in Damascus, the central bastion of President Bashar Assad’s rule.

Fighting has flared across Syria this week, as battles have ravaged Damascus neighborhoods, death tolls have skyrocketed, border crossings have fallen to rebel fighters and a rebel bomb attack killed top members of Assad’s regime.

Assad’s national security chief, Gen. Hisham Ikhtiyar, died Friday from wounds sustained in the bombing Wednesday that killed three others, including the defense minister and Assad’s brother-in-law. All were key to the government’s efforts to stamp out the insurgency.

The clashes echoed those seen elsewhere in Syria, with lightly armed, disorganized rebels avoiding direct battles with better-equipped government troops while launching ambushes on their convoys and checkpoints.

The regime, for its part, has deployed overwhelming firepower, shelling from afar and sending attack helicopters that rebel weapons can’t reach.

“We often make tactical retreats so that there is no face-to-face confrontation,” a rebel named Mohammed from the Eagles of Damascus brigade said via Skype. “It’s like gang warfare. We pull out so we can hit in a different place or plan an attack on a regime checkpoint.”

Like most rebels, his group has only assault rifles and rocket-propelled grenades, but lacks long-range weapons, leaving them helpless against government shelling and helicopter strikes.

“If we had all the ammunition we needed, we would have liberated the capital in two days,” he said, asking that his full name not be published for fear of government reprisals.

This dynamic defined the battle for Midan, a south Damascus neighborhood that regime forces retook Friday after days of intense clashes.

During a government tour of the area, an Associated Press reporter saw dozens of torched or damaged cars in streets lined with shattered shop fronts.

The dead bodies of six young men lay in the street. One appeared to have been shot in the chest. Others were bearded and wore black.

Syrian state TV trumpeted the government’s taking of the neighborhood.

“Our heroic forces have completely cleansed the Midan area of the terrorist mercenaries,” it said, using government shorthand for the rebels. It said the forces had seized lots of weapons, including machine-guns, explosive belts and rocket-propelled grenades.

But indicating that the capital remains unsafe, the journalists rode in two armored vehicles.

A Damascus activist who gave his name as Huthayfa said via Skype that local fighters withdrew late Thursday because they could not face the army’s heavy weapons.

“It was very dangerous for the civilians and the fighters, so we decided to pull out to come up with a new plan to take the area,” he said.

Knowing they cannot defeat the army militarily, rebels hope to sap the regime’s strength until it collapses.

“Their strategy is to paralyze public institutions and chip away at the regime,” said another activist who goes by the name Bashir al-Dimashqi.

Fighting raged in and around the capital. Troops fired at anti-regime protesters in Khalid bin Walid Street downtown, killing five people and sparking clashes with local rebels who attacked the police station.

More than 170 people were killed across Syria on Friday, including about 50 in Damascus, the Britain-based Syrian Observatory for Human Rights said, pushing the death toll over the past two days over 470.

Activist claims and videos could not be independently verified. The Syrian government bars most media from working in the country.

In Geneva, the U.N. refugee agency said the fighting had caused a spike in the number of refugees fleeing the country. The group estimated earlier this week that some 120,000 Syrian refugees were in neighboring countries and another 1 million were displaced inside Syria.

The violence has cast a pall over international efforts to end the civil war through diplomacy.

The U.N. Security Council voted Friday to extend the mission of some 300 observers in Syria for 30 days. The observers, sent to oversee a cease-fire that has never taken hold, have been largely confined to their hotels in recent weeks. On Thursday, Russia and China vetoed a resolution backed by key Western nations that would have threatened non-military sanctions on Assad’s regime.

Syria’s unrest began in March 2011 when protests calling for political change met a violent government crackdown. Many in the opposition have since taken up arms as the conflict has morphed into a civil war that activists say has killed more than 17,000 people. The government says more than 4,000 security officers have been killed.

This week’s bombing, which appeared to be an inside job, has raised questions about cracks in Assad’s regime.

Assad did not attend and has only appeared publicly in one soundless video on state TV since the bombing, raising questions about his whereabouts.