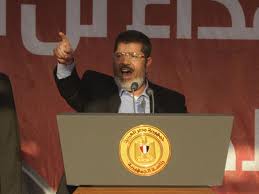 President Mohamed Morsi on Friday urged Egyptians to overcome the usual lethargy associated with the fasting month of Ramadan and keep up “work and production.”

Morsi, who was sworn in last month as Egypt’s first elected civilian president, attended Friday prayer at a mosque in his hometown of Zagazig in the Nile Delta to greetings of “Blessed Ramadan, doctor!” from several worshippers.

As soon as the prayer was over, he took the microphone to make what appeared to be an impromptu speech.

“Blessed Ramadan to you all,” Morsi told attendants who scrambled to capture the moment on their mobile phones, in scenes shown live on state television.

“Ramadan is a month of fasting and worship… and it is also a month of work and production,” Morsi said, repeatedly calling on Egyptians to “keep working.”

“God is greatest!” chanted the worshippers at Al-Fath mosque, waving at the president as he left with his security and entourage.

During the holy month of Ramadan, Muslims fast from dawn to dusk and strive to be more pious and charitable. The month begins with the sighting of the new moon, which varies from country to country.

In Egypt, Ramadan began on Friday.

Morsi’s understated attendance contrasted sharply with the formal appearances of his predecessor, Hosni Mubarak, who was ousted by a popular uprising last year.

A former official with the once-banned Muslim Brotherhood, Morsi has tried to present an image of an ordinary and approachable leader.