Assad Appears on TV After Bombing 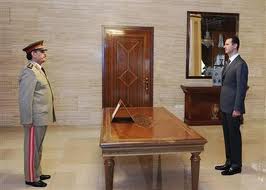 Beirut, Lebanon – Syrian President Bashar Assad made his first appearance Thursday since a bomb killed some of his top lieutenants, looking calm and composed on state TV even as his forces turned parts of Damascus into combat zones and rebels seized two of the country’s border crossings.

The unprecedented attack on Assad’s inner circle Wednesday, along with the government’s inability to crush the rebels after five days of intense clashes in the Syrian capital, point to an unraveling of his grip on power after 16 months of violence.

“It is a war going on here, literally a war,” said a 25-year-old woman in the Muhajereen neighborhood. The sounds of battle had kept her up all night and she stayed home from work because she feared random gunfire, she added.

“It reminded me of that night when the Americans shelled Baghdad nine years ago,” said the woman, who spoke on condition of anonymity because she feared for her safety. “I was watching it on TV, but today I’m living a very similar situation.”

Even though Assad’s powerful military remains mostly loyal — suggesting a total collapse may not be imminent — the rebels appeared to be making startling gains as the civil war intensified.

Besides the fighting in Damascus, about a half-dozen rebels took over a Syrian border crossing near the Iraqi town of Qaim, said Iraqi army Brig. General Qassim al-Dulaimi. There are four major border posts with Iraq.

Rebels overtook a Syrian army outpost near the Syrian-Iraq border after clashes that killed 21 Syrian soldiers, he added.

In addition, amateur video posted online showed rebels taking over the Bab al-Hawa border crossing with Turkey, where they stomped on portraits of Assad. The Associated Press could not independently verify the video because the government bars most media from working independently in the country.

A diplomatic solution to ending the bloodshed seemed even more remote after Russia and China again vetoed a Western-backed U.N. resolution aimed at pressuring Assad’s government to end the escalating conflict.

Analysts said the regime was clearly shaken by the violence in the heart of its power base of Damascus, but the next step was not clear yet.

“We should not get carried away with speculating about the impending fall of the regime,” said Salman Shaikh, director of the Brookings Doha Center and an analyst on regional politics. He said the regime’s forces “are still showing a certain amount of cohesiveness in battle.”

Citing a network of sources on the ground, the Britain-based Syrian Observatory for Human Rights reported intense clashes in a string of neighborhoods along the southern edge of Damascus, the northeastern neighborhood of Qaboun, and in number of western suburbs.

Gunfire and booms from shelling could be heard throughout the capital, and streets in the hard-hit areas were largely empty, save for government troops or rebels.

On Thursday, many Syrians said they were not waiting around to see if the violence would end any time soon. Thousands streamed across the Syrian border into Lebanon at the Masnaa crossing point — about 25 miles (40 kilometers) from Damascus.

Hundreds of private cars as well as taxis and buses ferried people across.

Even if Assad did leave power, the opposition is widely perceived to be far too disorganized to take over. There is no clear candidate to lead the country in Assad’s absence, and the grim sectarian tint to much of the violence suggests any power vacuum will usher in a bloodbath.

Sunnis make up most of Syria’s 22 million people, as well as the backbone of the opposition. But Assad and the ruling elite belong to the tiny Alawite sect, an offshoot of Shiite Islam.

Assad is relying heavily on his Alawite power base to crush the uprising, prompting revenge attacks and fear among other minorities that they face retribution if the regime falls.

Another fearsome factor is the emergence of extremists among the forces looking to oust Assad. Several big suicide attacks this year suggest that al-Qaida or other terrorist forces are joining the fight.

U.S. officials said al-Qaida’s presence has risen slightly, with one official putting the estimate at a couple hundred operatives attempting to hijack Syrian unrest. They operate under the name of the Al-Nusra Front, which has claimed responsibility for a series of bomb attacks on regime targets, including a government-run TV station in June, the officials said. But opposition forces, such as the leaders of the rebel Free Syrian Army, have made clear to U.S. officials that they reject the group’s methods, because the attacks often occur in public areas where civilians have been killed and injured.

The officials spoke on condition of anonymity because they were not authorized to describe the intelligence and analysis publicly.

Assad has not spoken about the bombing that killed three top aides: Defense Minister Dawoud Rajha, 65, a former army general and the most senior government official to be killed in the uprising; Gen. Assef Shawkat, 62, the deputy defense minister who was married to Assad’s elder sister, Bushra, and was one of the most feared figures in the inner circle; and Hassan Turkmani, 77, a former defense minister.

Rebels claimed responsibility, saying they targeted the room where the top government security officials in charge of crushing the revolt were meeting.

Assad’s appearance Thursday was carried on state TV without audio, but the report appeared aimed at sending the message that he is alive and well, and in control. The report said Assad, wearing a blue suit and tie, swore in the new defense minister and wished him good luck. The report did not say where the ceremony took place.

Assad does not appear in public frequently, and rumors swirled that there was far more to Wednesday’s bombing than meets the eye.

It is still a mystery how anybody could have planted a bomb in such a high-level meeting, inside the National Security building, at a time of deep crisis.

Some observers believe it was almost certainly an inside job, carried out by a sleeper agent who had been a trusted regime confidante. Others speculate the bombing was actually the work of the regime itself, to decapitate a group of leaders who may have been planning a coup.

Adding to the confusion, Syria’s state news agency warned citizens that gunmen were disguising themselves in military uniforms to carry out attacks.

“Gunmen are wearing Republican Guard uniforms in the neighborhoods of Tadamon, Midan, Qaa and Nahr Aisha, proving that they are planning attacks and crimes,” it said.

In one chilling online video, dozens of dead and wounded were shown on the floor of a mosque in the Sayida Zeinab area, south of Damascus. An off-camera narrator says government helicopters fired on them Wednesday. Another video showed what appeared to be at least 40 bodies wrapped in cloth in a mass grave.

The AP could not verify the video.

“It pains me to say, but we are not on the track for peace in Syria,” Mood told reporters in Damascus. Hours later at the United Nations, Russia and China vetoed a new Security Council resolution on the crisis.

The resolution would have imposed non-military sanctions against Assad’s government if it didn’t withdraw troops and heavy weapons from populated areas in 10 days. It was tied to Chapter 7 of the U.N. Charter, which could eventually allow the use of force to end the conflict.

Russia and China have long opposed any moves that put the blame exclusively on Damascus or could pave the way for foreign military intervention in Syria.

The 11-2 vote, with two abstentions, leaves in limbo the future of the 300-member U.N. monitoring team in Syria, whose mandate expires Friday.

White House spokesman Jay Carney told reporters aboard Air Force One that Washington does not support extending the mission without the necessary backup.

“The United States does not support extending a mission where you send unarmed U.N. employees into Syria to try to observe the brutality of the Assad regime, when there is no mechanism within the resolution to create consequences for the regime for failing to live up to its obligations,” he said.