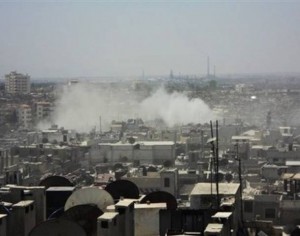 The Syrian military gave residents 48 hours to leave the parts of Damascus now held by rebel forces as it prepared a counterattack aimed at retaking control of its power base and pushing back four days of dramatic rebel gains.

The rebel Free Syria Army on Thursday continued to hold ground it had seized in key parts of the capital during this week’s major attack, and was bracing for a decisive battle against loyalist forces who appear to have been caught off guard by the co-ordinated assault.

Guerrilla units continued to push their gains elsewhere in the country, apparently seizing control of at least two border crossing points into Turkey and all crossings into Iraq, according to videos posted on the internet. Such crossings could prove crucial in funnelling supplies into besieged rebel areas.

Syria’s second city of Aleppo also saw fresh fighting, with rebels claiming to have routed loyalists from the Azzaz neighbourhood, and to be involved in heavy fighting in nearby Idlib city.

The clashes came a day after a bomb planted in a key security building killed three of the regime’s most senior figures, including Assef Shawkat, the intelligence chief who had overseen the 17-month crackdown.

In the wake of the assassinations, the Syrian armed forces’ chief of staff, Fahad Jassim al-Freij, was rapidly named as a replacement for killed defence minister, Dawood Rahja.

“This cowardly terrorist act will not deter our men in the armed forces from continuing their sacred mission of pursuing the remnants of these armed terrorist criminal gangs,” Freij said on state television, in a bid to douse fears of a power vacuum. “They will cut off every hand that tries to hurt the security of the nation or its citizens.”

Activists and Free Syria Army commanders continued to report a sharp increase in defections in the wake of Wednesday’s bombing, but there was nothing yet to indicate that the overall command structure of the Syrian military had been weakened.

The day before the bomb attack, an opposition figure involved in organising defections claimed there were more figures inside the regime who had secretly switched sides and stayed in place than those who had publicly defected, like Republican Guard general Manaf Tlass and the ambassador to Baghdad, Nawaf al-Fares.

“Those were symbolic defections, but we have a lot of ministers and officers working with us, who are still inside. These are far more valuable figures,” the opposition source said. “The week before Tlass defected, 50 officers in the Republican Guard were put under house arrest. They don’t know who to trust. And two days before the Tlass defection, 18 senior officers and 200 soldiers came over to our side.”

The spectacular attack at the heart of one of the regime’s key weekly military strategy meetings continued to reverberate outside of Syria, with some commentators speculating that foreign intelligence organisations may have helped rebels target the meeting.

Paul Salem, the director of the Carnegie Middle East Centre in Beirut, suggested Washington may have “tapped into” the Syrian military’s communications. “They [US intelligence] can listen and they can jam. They have aerial night-time capacity. The Syrian military can’t operate at night,” he said, adding that this top-secret intelligence was far more useful to the rebels than “a few guns”.

Rebel leaders have insisted, however, that the intelligence was theirs alone and had been gathered over many months in which key regime aides had been recruited and trained. Before the attack, rebel forces had shown a sharp improvement in command and control and a new ability to co-ordinate large operations.

Salem said that the bombers had struck a “crushing blow” against the Assad regime: “The panic level inside Assad’s inner circle must be enormous. They [the Free Syrian Army] have just blown up his entire command,” he said, adding: “The sense that this ship is going down must be high.” He predicted further defections from Assad’s team, including possible “soft defections”, with commanders opening lines of communication with the Russians and Chinese.

“They can’t recover from this, is my reading. The slide is on. It’s rapid,” he said, adding that Assad may have already left his crumbling power-base in Damascus, or would have to leave soon.

Salem suggested that Assad an, his key advisors, and army units still loyal to him, could eventually abandon the Syrian capital and retreat to the traditional Alawite heartland in the country’s mountainous north west and Mediterranean coast, which would act as a stronghold.

Here, they would continue resistance, while possibly carving out a land corridor to Iraq and to Iran, Assad’s key regional backer. Central to this strategy would be the loyalist port cities of Latakia and the important naval base of Tartus. “They will take their guns, money, the sea lanes,” Salem suggested. “They will build a completely secure Alawite zone. The regime has planned for this day for 40 years,’ he said, observing: “The Sunnis can’t beat them there.”

On Thursday, residents of Damascus, Homs and Hama reported intense shelling from regime positions in each city as well as rocket fire from helicopters. The barrage came ahead of the Muslim holy month of Ramadan, which is due to begin on Friday. Ramadan is traditionally a time of fasting and reflection and had been thought likely to mark a lull in the fighting now ravaging the country.

However, the regime’s warning to Damascus residents clearly suggests that this Ramadan will be different and could instead herald a decisive phase in the uprising in Syria that the International Committee for the Red Cross now designates as a civil war.