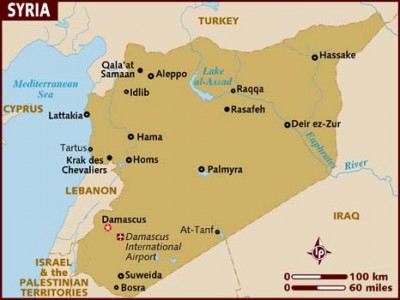 “Rebel fighters seized control of the Bab al-Hawa crossing (in the northwestern province of Idlib) on the border with Turkey,” the Britain-based Observatory for Human Rights said, adding that the rebels went on to remove the photograph of President Bashar al-Assad that was displayed at the frontier post.

Activists said that the FSA also seized control of the Bab al-Salam crossing on the border with Turkey.

Iraqi officials confirmed the reports that the FSA had seized control of al-Bukamal crossing on the border with Iraq, AFP reported.

“At noon, the clashes began. And then in the evening, we saw the Syrian flag being brought down and the flag of the Free Syrian Army replaced it,” an Iraqi border police lieutenant colonel told AFP, speaking on condition of anonymity.

Amateur video posted on YouTube showed rebels firing into the air and describing the seizure as “the liberation of Bab al-Hawa.”

Another video, purportedly filmed at the border post, shows two men burning a large portrait of Assad’s father and his predecessor Hafez, along with the Baath party flag.

Anti-regime sentiment is strong in Idlib, and according to activists large parts of this border province have long been under rebel control.

Bab al-Hawa border crossing has been closed since the attack and around 40 Syrian and Saudi trucks lined up on the Turkish side were unable to cross.

While cross-border trade and traffic has been greatly reduced as violence inside Syria has increased, border gates along the 910 km (560 mile) Turkey-Syria border have largely remained open and vehicles are free to cross.

The border raid came as rebels clashed with troops loyal to Assad in Damascus and a day after a bomb attack on a security meeting in the Syrian capital killed three of the president’s closest allies.

Turkey, which has called on Assad to step down, is giving sanctuary to opposition members and fighters on its soil and is providing shelter to more than 40,000 Syrian refugees fleeing violence at home.

Meanwhile, nearly 19,000 Syrians, many from the capital, have fled from violence at home across the border into Lebanon since Wednesday, a Lebanese security source said.

“More than 18,600 Syrians have arrived since yesterday from Syria through the eastern Masnaa crossing, among them many people from Damascus and its province,” the source said.