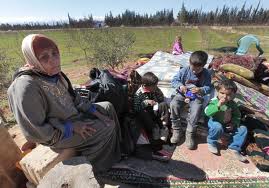 About 20,000 Syrians have travelled across the main border crossing into Lebanon over the past 24 hours, a Lebanese security source working at the border said, after heavy fighting tore through several districts of Damascus.

The number of Syrians, many of them day-workers, who travel through the official Masnaa border crossing usually hovers around 5,000 per day, the source said.

Lebanese minister of social affairs Wael Abu Faour did not comment on the total number of Syrians who had crossed but said that 8,500 Syrian refugees from Damascus made the trip in the last 24 hours.

Abu Faour told journalists that the Lebanese government would open school buildings for refugees to live in and had received offers of help from Arab countries.

Fighting in Damascus escalated sharply on Thursday, a day after a bomb attack which killed President Bashar al-Assad’s brother-in-law, the defense minister and a top general.

Some districts suffered heavy shelling and residents told Reuters many people had moved to quieter neighborhoods or were attempting to leave the country.

The Lebanese security source said foreigners including diplomats and some international aid workers were among those who crossed the border on Thursday.

Assad’s forces responded to pro-democracy demonstrations in March 2011 with bullets and arrests. The uprising has since become an armed revolt and rebels and government troops are battling around the country.