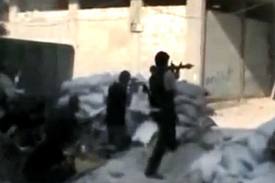 The Syrian uprising, which grew from the nation’s provinces, appears to have come to Damascus in earnest during the last two days.

Opposition activists have called the clashes on Sunday and Monday in Damascus the heaviest fighting to date in President Bashar Assad’s seat of power.

But, while the noose may be tightening, the clashes probably don’t signal that the end is near for Assad, whose forces enjoy a substantial firepower advantage over an opposition armed mostly with rifles. Republican Guard troops defend the capital, their ranks reportedly bolstered near important installations.

In Syria’s two largest cities, Damascus and Aleppo, Assad also maintains core backing among minorities and others fearful that his ouster could usher in a period of Iraq-like turmoil and sectarian bloodletting. The Syrian leader regularly portrays himself as the last bulwark against chaos.

The two cities, the country’s political and commercial hubs, have experienced violence and protests, but not nearly on the scale seen in provincial cities such as Homs, Hama and Dara. Insurgent leaders have been vocal about their desire to take the fight to Damascus and Aleppo.

For the first time since the revolt began, the opposition says, armored vehicles were posted in the sprawling Midan quarter, near the old walled city and modern business and office districts. The opposition accused government forces of firing mortar rounds at insurgent positions.

Grainy video posted on YouTube, purportedly from Damascus, showed the kind of urban combat scenes more reminiscent of strife-ridden cities such as Homs.

Though independent verification of the clashes was hard to come by, there were signs that the government was stepping up security in the capital.

The official Syrian news agency reported Monday that authorities pursued “an armed terrorist group” — the standard government depiction of armed opposition — to the Damascus suburb of Nahr Aisha after fighters had fled the Tadamon district. The opposition reported heavy fighting Sunday in Tadamon.

The Damascus violence highlights what appears to be an eroding security climate in the capital and elsewhere. The Syrian army has been forced to fight on many different fronts, diminishing its effectiveness. Rebels make use of a de facto safe zone in southern Turkey to ferry in weapons and other supplies.

Rebellious suburbs now ring much of Damascus. Last month, the Syrian military was forced to launch what amounted to an invasion to reassert its authority in Duma, a sprawling suburb northwest of the capital that was home to more than 100,000 people. Large swaths of the district were reduced to rubble.

The 16-month-old uprising has shown that insurgents may abandon a district in the face of superior government forces, but they are quick to return once troops are redeployed to the next hot spot.

Many analysts agreed that the fighting seems likely to remain a stalemate as long as insurgents lack the heavy weaponry needed to neutralize the government’s tanks and helicopters.

The diplomatic debate on Syria also seems mired. The United States and its allies are pressing this week for United Nations sanctions against Assad’s government. But there is no sign that Russia, a veto-wielding member of the U.N. Security Council, will go along with the plan.

On Monday, Russian Foreign Minister Sergei Lavrov accused Washington and other allied capitals seeking Assad’s ouster of engaging in diplomatic “blackmail,” linking sanctions against Syria to an extension of the unarmed U.N. observer mission in Syria. Russia wants the mission extended, but opposes any sanctions on Assad’s regime.

“It is unacceptable to use observers as bargaining chips,” Lavrov said in Moscow.

Later Lavrov met with Kofi Annan, the U.N. and Arab League special envoy for Syria, who is visiting Moscow. The former U.N. chief is scheduled to meet Tuesday with Russian President Vladimir Putin.

In Washington, a State Department spokesman told reporters that events in Damascus underscored Assad’s increasingly tenuous grip on power in the face of an opposition that is gaining strength.

“Our assessment is that the violence is increasing in Damascus, that the regime doesn’t clearly hold the territory of the entire country,” said Patrick Ventrell, department spokesman. “We think that the Assad regime is losing control and that he continues to take his country toward a dangerous end.”