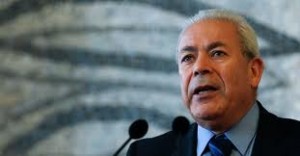 Syrian opposition talks with Russia on a political transition in Damascus ended in discord on Wednesday as an opposition leader said Moscow’s policies were helping to prolong the bloodshed in the pivotal Arab country.

“The Syrian people don’t understand Russia’s position. How can Russia keep supplying arms? How can they keep vetoing resolutions? There needs to be an end to mass killings,” said Burhan Ghalioun, former leader of the Syrian National Council.

Russia has acted as one of Assad’s few supporters, sending him arms and blocking Western-led attempts to isolate him with U.N. sanctions while violence in Syria has raged on, raising the death toll over 17,000, by a count of opposition activists.

Syria’s opposition has conditioned starting talks with the Damascus government on Assad relinquishing power. But Russia – long a big arms supplier to Damascus – has said this is unacceptable and not part of an international peace plan laid out by U.N.-Arab League envoy Kofi Annan.

“We have made it very clear that any transition period must start with Assad’s departure as otherwise we are really not dealing with the problem,” Abdelbasset Sida, leader of the opposition Syrian National Council, told reporters in Moscow.

A member of the SNC delegation said that Moscow had not fundamentally changed its position but that while Russian diplomats were “contradicting themselves”, he said they were “looking for a genuine solution”.

The talks followed separate meetings with other opposition leaders in Moscow on Monday as Russia strives to boost its diplomatic clout in international negotiations over how to end Syria’s bloodshed.

The United States and its European and Gulf Arab allies have said Assad, whose family has dominated Syria for 42 years, must go to enable a peaceful transition. Russia, China and Iran have disagreed, helping Assad withstand pressure to step down.

Foreign Minister Sergei Lavrov pressed the Syrian National Council on the Annan plan and points agreed during the meeting of an “Action Group” in Geneva on June 30, which envisages a political transition but leave Assad’s fate open.

“Lavrov decisively called on counterparts to take a clear and unequivocal position confirming the readiness of the SNC to carry out its obligations,” a Foreign Ministry statement said.

Russian officials said Moscow was committed to a political transition in Syria but that a dialogue between government and opposition should not require Assad’s departure.

But in a move that, if confirmed, may presage a Russian shift away from the authoritarian Syrian leader as rebel forces have gained some strength, a Russian arms trade official was quoted earlier this week as saying Moscow would deliver no more weapons to Assad while the fighting continued.

Russia circulated a draft resolution at the United Nations on Tuesday to extend a U.N. monitoring mission in Syria now bottled up in hotels by the violence.

A source in the Russian navy said a Russian warship had left for Syria on Tuesday and another military source said four more were en route there but that this had nothing to do with the Syrian conflict.

The sources said the vessels were carrying provisions to a small maintenance and repair facility that Russia maintains in the Syrian port of Tartous, the only naval base it has outside of the former Soviet Union.