Russia sends warships to its base in Syria 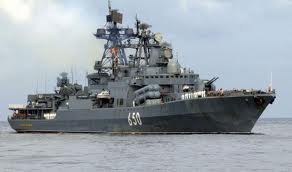 For the last year, the Russian government has tried to project an image of neutrality in the increasingly bloody conflict in Syria.

Now, it may be sending a signal of support to its longtime ally, President Bashar al-Assad, by sending warships to the area. Russia may also want to protect its forces at its Tartus naval base.

A flotilla of Russian Navy ships set sail Tuesday for the Mediterranean, where Russia maintains a small base at Tartus, Syria.

A destroyer and three landing ships left the Arctic port of Severomorsk. A second destroyer left Russia’s base at Sevastopol, Ukraine. And Interfax reported that more warships from the Baltic Fleet, based in St. Petersburg, are preparing to join the flotilla.

In a key policy speech to top Russian diplomats gathered in Moscow, he accused the West of using deception to gain political advantage.

“This can be seen from the so-called humanitarian operations, from exports of the ‘missile-bomb’ democracy, and intervention in internal conflicts, including those bred by the ‘Arab spring’,” said the president.

While briefing reporters, Basma Kodmani, a member of the executive bureau of the Syrian National Council, appealed to Russia to help Syrians turn the page and switch to a new democratic system.

The Kremlin and Syria’s opposition share common ground – a fear of chaos, anarchy and religious radicalism, she said.

During the Assad family’s 40-year rule of Syria, thousands of Syrians studied in Moscow and many married Russians.

Munzer Mahos, a member of the Syrian National Committee, started to speak in Russian to reporters before switching to Arabic.

“We consider Russia our friend, our historical ally. The former Soviet Union and now Russia have done a lot for us. We have maintained a long-time solid friendship, so this is not about pushing Russia aside,” he said.

On Wednesday, the Syrian opposition members are to meet Russian Foreign Minister Sergei Lavrov. The Syrians said they would not ask Russia to give asylum to President Assad and his family.

One opposition member, Mahmoud al-Hamza, told reporters that the opposition National Council opposes granting asylum to the Syrian president. He charged that Assad “has stained his hands with the blood of the Syrian people.”

Russian diplomats say the Syrian president has not asked for asylum. They say that Russia’s relations with Syria are not tied to the Assad family remaining in power.

Afterwards, one member of the group, Hazem Nahar, warned the Kremlin to stop sitting on the fence.

“The more you wait, the greater the risk Islamists will come to power in Syria,” he said.

Looking to a post-Assad future, he warned: “If Russia does not change its position, Syria will stop being its ally.”

But, with Russian Navy ships from three Russian fleets now steaming toward Syria’s coast, the Kremlin seems to be sending a clear signal that it will stand by Assad.