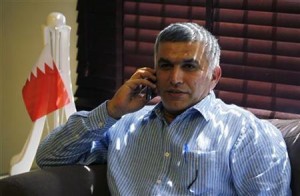 A prominent Bahraini protest leader, Nabeel Rajab, was sentenced to three months in prison over a tweet against the prime minister which the court said insulted Bahrainis, Rajab’s lawyer and a colleague said.

Rajab, head of the Bahrain Centre for Human Rights (BCHR), spent three weeks in jail in June under investigation after suggesting in a tweet that residents of the Muharraq district had made a recent show of support for Sheikh Khalifa bin Salman only for financial gain.

A complaint over that and other tweets against the prime minister, who has been in his post since 1971, was made by a group of retired army and security officers who are seen as pro-government.

Rajab has been a key figure in organizing protests during 16 months of unrest in the Gulf Arab state as majority Shi’ites lead calls for democratic reforms to limit the powers of the ruling Sunni Al Khalifa family.

Bahrain has increased parliament’s powers of scrutiny over ministers and says it is reforming policing to conform with international rights standards. It accuses protesters of rioting and wounding police.

After the court’s ruling, police took Rajab from his home in the Bani Jamra district west of Manama, said Sayed Yousif al-Muhafda, a colleague from the BCHR. He said he was inside the home at the time.

The judge said the time Rajab had already spent in jail would count towards the sentence, Rajab’s lawyer Mohammed al-Jishi said.

“Every day there are a thousand people insulting a thousand people, this isn’t logical. Normally the charge of insult leads to just a fine. So for me it’s a surprise,” said Jishi, who said he would immediately lodge an appeal.

The prime minister, the uncle of King Hamad bin Isa, has been a lightning rod for the opposition who have demanded his ouster. But many Sunnis who fear empowering Shi’ite Islamists in the opposition see him as a key support.

The Arab uprisings have seen changes of leader in Egypt, Tunisia, Yemen and Libya but Bahrain – a U.S. ally that hosts the U.S. Fifth Fleet – imposed martial law to try to crush the uprising last year.

Washington has urged Manama to hold a dialogue with the opposition to end the unrest and hold officials accountable for rights violations uncovered in a probe led by international legal experts and published in November.