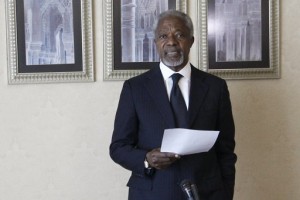 United Nations-Arab League peace envoy Kofi Annan says he and Syrian President Bashar al-Assad have agreed on an “approach” to end the violence in Syria.

Speaking after talks with Assad on in Damascus on July 9, Annan didn’t disclose details, but said he also intends to discuss the “approach” with the armed opposition that has been fighting to end Assad’s rule.

Reports say Annan was expected to travel next to Tehran for talks on Syria with Iranian officials.

Lavrov said Russia was the only state talking to both the Syrian government and opposition about implementing an internationally-backed peace plan that calls for an immediate cease-fire and negotiations.