Annan arrived in Tehran for talks over Syria crisis 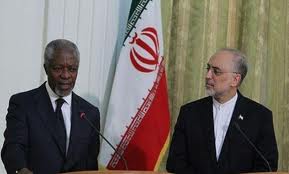 Prior to departing from Damascus Annan said that he and Syrian President Bashar al-Assad have agreed on an “approach” to end the violence in Syria. Annan didn’t disclose details but said he also intends to discuss the “approach” with the armed opposition that has been fighting to end Assad’s rule.