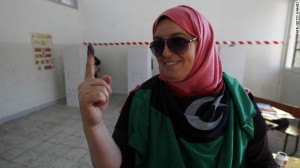 After four decades of political exclusion, Libyans on Saturday night celebrated a historic election that many saw as the African nation’s first steps to building a free and democratic nation.

The landmark parliamentary vote was marred in places by disruptions that prompted polling centers to close, but the overall turnout was higher than expected.

Votes were cast as planned at 98% of all polling stations, Al-Abbar said earlier in the day.

And by Saturday night, after the final votes were cast, there was revelry as drivers honked their horns around the capital of Tripoli as they and other Libyans rejoiced at the country’s transformation over the past year.

The city’s main square — once called Green Square for Gadhafi’s political philosophy outlined in his Green Book but now known as Martyr’s Square for all those who fell in last year’s revolution — became a focal point for the celebrations, with it and the surrounding streets packed with cars.

“We never … voted before, we never did elections before, so it’s totally new to us,” said blogger and medical student Ruwida Ashour from the eastern city of Benghazi. “It won’t be easy (but) it’s our country.”

The last time Libya held an election was almost half a century ago and for many people, the act of casting a ballot was novel after 42 years of Moammar Gadhafi’s autocratic rule.

Besides significant participation among average citizens (about 80% of the nation’s 3.5 million eligible voters registered ahead of the vote), the election indicated there was strong interest among people interested in being part of the nation’s fledgling government as well. More than 3,500 candidates stood in the election for a 200-seat national assembly, with the winners expected to be announced by the end of next week. 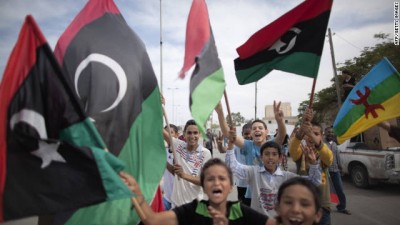 Men and women, young and old waited patiently Saturday in long lines in cities and towns across Libya — some that were war zones only a year ago. After voting, jubilant Libyans proudly waved their right index finger smudged in purple indelible ink as proof of their participation.

Sizzling summer temperatures did not keep people away in Tripoli, where loudspeakers blared: “Allahu akbar” (God is great).

Hanaa bin Dallah, 32, carried her 2-month-old son Rahman with her to the polls. She was heartened by the participation of so many people, despite the weather.

“I hope my word will make a difference — not like the past,” she said.

Hawwaa BouSaida, 65, said she had never been to school in her life but was proud to be voting.

“After 42 years of not even not knowing what elections are, and were blinded, we are voting today for the first time,” she said.

Akram Mohamed BinRamadan returned from exile in Britain to fight last year with the rebels. Still dressed in military fatigues, he said it was time now to stop the fighting and begin the difficult task of rebuilding the nation.

“I think it’s time to take all these off,” he said. “This is going to be a free country.”

U.S. President Barack Obama issued a statement congratulating Libyans “for another milestone on their extraordinary transition to democracy.”

“After more than 40 years in which Libya was in the grip of a dictator, today’s historic election underscores that the future of Libya is in the hands of the Libyan people,” Obama said. “…As they begin this new chapter, the Libyan people can count on the continued friendship and support of the United States.”

More than 13,000 soldiers were on the streets Saturday. But not all went smoothly.

Two polling centers were set ablaze in the eastern city of Benghazi, said Alexander Graf Lambsdorff, head of the EU election assessment mission. And in two other cities, polls did not open until 2 p.m. (six hours before they were set to close).

In the eastern city of Ajdabiya, five polling centers opened but four others on the outskirts did not.

On Friday, anti-aircraft fire hit a Libyan air force helicopter transporting ballot boxes from the eastern city of Benghazi to nearby areas, the Interior Ministry said. One person was killed. It was unclear who was behind the attack.

And protesters earlier this week attacked a warehouse and torched ballots and other election materials. 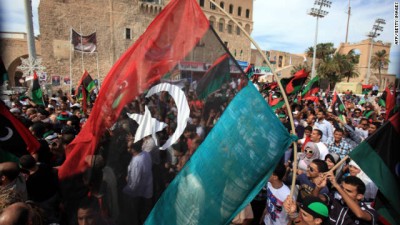 This was one of several anti-election incidents staged by Libyans in the east who see an unequal distribution of seats in the national assembly. The 200 seats are allocated by population, reserving 100 for the western Tripolitania, 60 for Cyrenaica in the east, and 40 for the south.

The mistrust stems from the many years of Gadhafi’s rule, under which the eastern region felt largely neglected and marginalized. Benghazi emerged as the cradle of the Libyan uprising but many of its residents now feel their revolution has been usurped by the National Transitional Council based in Tripoli.

Mohammed al-Sayeh, a member of the National Transitional Council, dismissed the disruptions as “minor” and said there was no lack of trust between east and west.

“Libya will be always united,” he said. “It is the first fair and legitimate election.”

Authorities flew in fresh ballots printed in the United Arab Emirates, but the shipment did not arrive in time for all the Ajdabiya polls to open.

Seven other polling stations in and around Benghazi were also closed due to pro-federalist threats against voters.

As the polls came to a close Saturday evening, Lambsdorff said it was too early to tell whether the election had been compromised by the violence.

“Again, we are talking about single isolated incidents,” Lambsdorff said.

Saturday’s vote is sure to be a litmus test for post-Gadhafi Libya. The new national assembly will be tasked with appointing a transitional government and crafting a constitution.

The nation’s new leaders, however, will have their work cut out for them as they begin a new, more democratic era.

Amnesty International published a scathing report this week about what it described as lawlessness in Libya, with the advocacy group urging the nation’s authorities to establish a functioning judiciary and rein in revolutionary militias that are accused of committing a plethora of human rights violations.

The disparate groups came together to topple Gadhafi but remain divided along regional lines. More than 200,000 Libyans are still armed and often operate outside of the law, according to Amnesty.

Security is just one of many obstacles.

The new government must figure out how to unify the country as it moves forward. That includes a reconciliation process for Gadhafi loyalists.

And there is the task of rebuilding a nation ravaged by dictatorship and last year’s conflict.

The National Transitional Council, Libya’s de facto rulers since Gadhafi was captured and killed in October, inherited a land where few civil institutions existed. The new government will have to create a functioning society out of that vacuum.

Libyans are clamoring for basic services. Heaps of trash litter roads because of the lack of proper disposal services, and assuring adequate health care is a priority for many.

He said he was ecstatic and incredulous to be casting a ballot, a notion that seemed implausible all his life. That was the first step, he said, to severing Libya from Gadhafi’s legacy.

Campaign posters and billboards in Libyan cities and towns advertised all the candidates running. Most are unknown to Libyans, much like the political process itself. Gadhafi was not one to cultivate political culture.

But Libyans have high hopes for their future.

“If Libya’s issues are a mosaic, I believe I hold one piece of it,” said Awziya Shweigi, one of the thousands of candidates. “It might be a small one, but an effective one that completes it.”

A geneticist by trade, she has been working to identify the bodies of those who died in Libya’s eight-month uprising. Now, she said she wants to do more.

Frederic Wehrey of the Carnegie Endowment for International Peace, who has been in Libya ahead of the parliamentary vote, said he was guardedly optimistic about Libya’s transition.

“The glaring shortfalls in the transition are the lack of development in the security sector and the continued activity of powerful militias,” Wehrey wrote on the think tank’s website.

“It’s tempting on the surface to see the situation on the ground as chaotic and alarming with armed men roving the streets. But it’s not all bad news, in many cases the militias actually maintain a degree of discipline, provide pre-election security, and work with the government to police their own areas — so things are being kept under control, at least for now. The key question is how these militias will react to the election results and the subsequent distribution of power among tribes and towns.”

Shweigi said she may not be an expert on defense or the national budget, but as a woman, she represents a large part of Libyan society. She is a widow and mother of six, and said her experience with family will make her an asset.

She has been campaigning on the streets, fully covered in Islamic dress, talking to women — and men.

“Previously we would not have as many pictures of women outside in public spaces, and now that’s becoming a normal event at least in Tripoli and some other areas as well,” he said. “So I think this election is changing women’s participation not only in politics but also in a larger scale.”

But she, like so many other Libyans, feels she was born again after Gadhafi was gone. And she wanted to experience the fruits of the revolution.