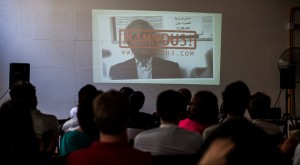 BEIRUT, Lebanon — When government censors in Lebanon reviewed a new film, “Beirut Hotel,” there was one scene that particularly caught their attention — a reference to a USB memory stick with documents on it about the 2005 assassination of former Prime Minister Rafik Hariri.

The censors tipped off their colleagues in another department of the General Directorate of General Security, the country’s internal intelligence agency, which then demanded that the film’s producer turn over the USB stick.

Of course, the film was fictional, and the stick nonexistent. And although the film contained risqué sex scenes compared with other Lebanese films, the censors banned it instead on grounds of national security for having simply mentioned the Hariri assassination — the defining event in recent Lebanese history.

The filmmaker, Danielle Arbid, said she moved to France in disgust. “Beirut Hotel,” released late last year, was her third feature film in a row to be banned in Lebanon. She joins a parade of artists to leave the country, following businesses and investors whose frustration with Beirut was more practical, and probably even more consequential.

With a new government dominated by allies of Hezbollah, long a proxy of Syria, censorship has been on the rise. Four new films have been banned this year — a record for the Media and Theater Department, as the censorship bureau is formally called.

Intellectually and artistically, Beirut has long been freer than other places in the Middle East; some now fear that that is under threat as never before. With the rise of the Shiite Islamists of Hezbollah, Lebanon’s Sunni Muslims — traditionally moderate — have been increasingly challenged by extremists, including Salafi mullahs in Sidon and Al Qaeda in the northern city of Tripoli. All of them have been pushing back against secular license.

“Why freer? Why an -er on that word?” asked Ayman Mhanna, executive director of the Samir Kassir Foundation, a group dedicated to freedom of expression, and named in honor of a journalist and critic of Syria who was assassinated after Mr. Hariri. Most of the rest of the region has little or no bragging rights when it comes to freedom of expression.

Christian groups have also been joining the call for censorship. “The majority of complaints are initiated by the churches,” Mr. Mhanna said. It is perhaps the only thing religious parties on all sides seem to agree on. “When it comes to censorship, they’re all perfectly O.K. with that.”

After its civil war ended in 1990, Lebanon never did regain its role as the economic powerhouse of the Middle East, and as a natural bridge between East and West. That did not help matters, either — prosperity has always encouraged greater freedom. Then Lebanon’s economic collapse last year was set off by the new government’s refusal to cooperate with the United Nations special tribunal investigating the role of Syria and Hezbollah in Mr. Hariri’s assassination, after it indicted Hezbollah officials. The uprising in Syria next door worsened investor confidence even further.

For many businesses and even cultural institutions, places like Doha, Qatar, and Dubai in the United Arab Emirates just seemed like a better bet, even though censorship is rife and political freedoms virtually nonexistent. Western museums and universities opened branches in the Persian Gulf states, not in the city once called the Paris of the Arab world.

In Beirut, the censors have banned “The Da Vinci Code” as anti-Christian and the TV series “The West Wing” as anti-Arab. The security directorate has broad powers in other areas, too, refusing permission, for instance, for the director Francis Ford Coppola to land his private jet in Beirut in 2009 because the engine included parts made in Israel; he had to land in Damascus, Syria, instead, and travel overland.

After the civil war, says Sarkis Naoum, a columnist for the newspaper An Nahar, “at first business did come back, but we did not regain our old position. In reality, the civil war did not end, just the military actions of the civil war ended.”

Sectarian squabbling between ministries adversely affected Lebanon in ways important to both the business and cultural communities. Internet speed is among the slowest in the world, 172nd among countries, according to Speedtest.net. “It takes me two days to download a short movie,” said Nadim Lahoud, a film producer. Cellphones and land line telephones are equally bad, and expensive.

“Nothing works in this country except the censorship bureau,” Ms. Arbid said by telephone.

Mr. Mhanna said infrastructure problems like that were cultural concerns as well, particularly Internet speed — which he believes the government keeps slow out of a misguided view by censors that it makes it easier to keep tabs on troublemakers. “Slow Internet service is one of the fundamental impediments to freedom of expression,” he said.

Mr. Lahoud decided to take on the censorship bureau directly, with a weekly dramatic series called “Mamnou3!” — a “mockumentary” set in a re-creation of the ’70s-styled office space of the censorship bureau, full of steel filing cabinets where the only computer is the size of a small refrigerator. (Mamnou means “forbidden” in Arabic.)

Financed by European Union grant money through the Samir Kassir Foundation, the series had its premiere on Monday — not on television, which would require approval of the bureau that it mocks, but online, promoted by social networking sites.

Photo: An underground screening in Beirut on Monday of “Mamnou3!,” a “mockumentary” set in a recreated censorship bureau.