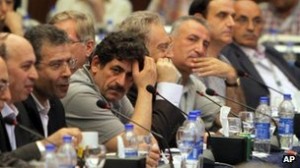 Syrian opposition groups have agreed on a general plan for the way forward in the country at a meeting in Cairo that exposed their deep divisions.

Delegates set out how a transitional period would work and what they would do if they managed to oust President Bashar al-Assad.

But they failed to reach an agreement on forming a unified body to represent them in negotiations with world powers.

At one point scuffles broke out when a Kurdish delegation walked out.

In Syria, at least seven people were reportedly killed on Wednesday.

The UK-based Syrian Observatory for Human Rights said four civilians had died in Maarat al-Numan in Idlib province, and that there had been clashes south of Damascus near a branch of Air Force Intelligence.

The Local Co-ordination Committees, an activist network, put the nationwide death toll at 20, including six people in the city of Deraa.

The BBC’s Jon Leyne in Cairo reports that Syria’s opposition is notoriously divided, so it is hard to say whether the agreements or the disagreements which emerged from the meeting in the Egyptian capital were more significant.

We are a people as we have language and religion, and that is what defines a people”

A final statement read by opposition leader Kamal al-Labuani said delegates “agreed that the political solution has to start by the fall of the regime represented in Bashar al-Assad and the icons of his power and calls for an immediate halt of violence committed by the Syrian regime”.

In one document, the delegates set out their plans for a transitional period, including an interim government and parliament. This had been called for by the Action Group for Syria, a body representing world powers.

They also outlined how they would reform the armed forces, set up a commission to investigate crimes against the Syrian people, and dissolve the ruling Baath Party, whose members would be allowed to help run the country as long as they did not have “hands stained with blood”.

A second document said the new post-Assad Syria would have a “republican, democratic, civilian, pluralistic” system of government. They also pledged to support economic and social justice through redistributive taxation and the prevention of monopolies.

However, the major point of disagreement was over the powers to be granted to a committee that would act as a single point of contact for the international community, recalling Libya’s National Transitional Council.