Journalist behind the lines in Syria sees no end to war 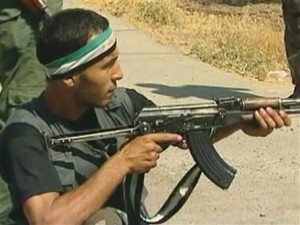 From the front line in what looks ever more like a fight for Syria’s capital Damascus, members of the Free Syrian Army appear to be closing in on President Assad’s stronghold, at a terrible cost to both sides. NBC’s Bill Neely reports.

As International Editor at NBC News’ British partner ITV News, Bill Neely has covered the Libyan and Egyptian revolutions, the 2008 terrorist attack in Mumbai, as well as the wars in Afghanistan and Iraq. He is on his fourth trip in seven months to Syria, a country largely off-limits to Western journalists, where he and his team are covering the war. He spoke to msnbc.com’s F. Brinley Bruton from Syria where he was witnesssing what he called “the battle for Damascus.”

Q: Are you surprised by the level of violence you’ve seen on this trip?

A: Every day there are surprising things to be seen. On my last trip I was genuinely surprised by the level of destruction in the Baba Amr district of Homs where Marie Colvin (an American correspondent for Britain’s Sunday Times) was killed. I think this time it has been really surprising to see three, four miles from the center of Damascus such sustained bombardment. Nobody in Damascus can be unaware of what’s happening.

I was surprised to see (the Free Syrian Army) operate quite openly. I mean, on Monday they drove us around for a long time through suburbs of Damascus. There wasn’t a sign in sight of any army presence and they weren’t hiding themselves, they were driving around with the guns out the window.

A few days ago (I was surprised by) the level of artillery and mortar fire going into Douma. It still has the capacity to shock you that an army will use that level of force to subdue a rebellion.

Q: How do you compare this to other conflicts you have covered in the past?

A: My immediate point of comparison would be [Libyan leader Moammar] Gadhafi [shelling] of the town of Zawiya which was 30 miles from Tripoli. Again there was a staggering level of force used in the bombardment.

In Kosovo it was very clear that it was ethnic cleansing, that Orthodox Christian Serbs were ethnically cleansing Muslims, as they had done in Bosnia. It is different here. The suburbs I was in yesterday are Sunni and the regime is not Sunni, it’s Alawite, a branch of Shiite Islam, so there is a sectarian element to it. I think the Kosovo thing was even more, well, brutal.

Q: Have we reached a tipping point in the conflict?

A: My view was was that this was a civil war several months ago, and I think if there were any doubt [Syrian President Bashar] Assad answered that question a few days ago when he said this is a war on all fronts.

We don’t like to call it a war in the West because we don’t have a damn clue what to do about it. At the minute it seems to me it is in the interest of the great powers to almost play this down.

One interesting aspect of this is that the U.N. has now stopped giving casualty figures, it has kind of been stuck for quite a long time at around 10,000. Well, it is way way over that.

Activists appear to have some grounding in fact and are coming up with about 18,600 civilians and rebels killed. The deputy foreign minister told me in May that there were more than 6,000 pro-regime dead. That takes you straight away to 25,000. Hillary Clinton said a few days ago it was 700 in the past week. I just looked at the activists figures and it looks about 100 a day now.

This is now the longest of the Arab revolutions by a long way, it is bigger than Libya, Egypt and Tunisia put together.