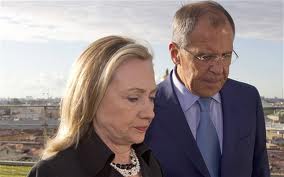 Beirut, Lebanon -World powers struck an agreement that a transitional government should be set up in Syria to end the conflict there but they remained at odds over what part President Bashar al-Assad might play in the process.

Peace envoy Kofi Annan said after the talks in Geneva on Saturday the government should include members of Assad’s administration and the Syrian opposition and that it should arrange free elections.

“Time is running out. The conflict must be resolved through peaceful dialogue and negotiations,” Annan told reporters.

The talks had been billed as a last-ditch effort to halt the worsening violence in Syria but hit obstacles as Russia, Assad’s most powerful ally, opposed Western and Arab insistence that he must quit the scene.

The final communique said the transitional government should be formed “on the basis of mutual consent”.

In a victory for Russia, it omitted text in a previous draft which explicitly said the plan would exclude from government anyone whose participation would undermine the transition’s credibility and jeopardize stability and reconciliation.

After the meeting, the United States and Russia contradicted each other over what that meant for Assad, who has ruled Syria for 11 years since succeeding his father Hafez and has been condemned internationally for the ferocity of his crackdown on the uprising against him.

Russian Foreign Minister Sergei Lavrov said he was “delighted” with the result. The key point was that the deal did not attempt to impose a process on Syria, he said

It did not imply at all that Assad should step down as there were no preconditions excluding any group from the proposed national unity government, Lavrov said.

But U.S. Secretary of State Hillary Clinton said it sent a clear message to Assad that he must quit.

“Assad will still have to go,” Clinton told reporters. “What we have done here is to strip away the fiction that he and those with blood on their hands can stay in power.” 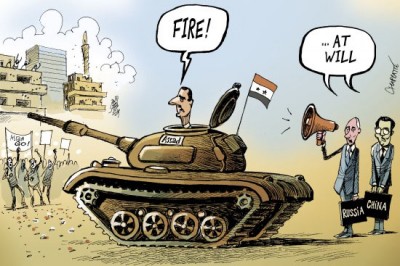 Annan convened the meeting at the United Nations complex on the shores of Lake Geneva to salvage a peace plan that has largely been ignored by the Assad government. He said at the opening that the conflict was in danger of growing into a regional and international crisis.

At its conclusion, the Nobel peace laureate fielded a question on whether people with blood on their hands could be part of a transitional government by saying:

“I would doubt that the Syrians who have fought so hard for their independence to be able to have a say in how they are governed and who governs them will select people with blood on their hands to lead them.

“I cannot say that I am really happy but I am content with the outcome today.”

Annan’s plan for a negotiated solution to the 16-month-old conflict is the only one on the table. More than 10,000 people have been killed since the anti-Assad uprising began and the past few weeks have been among the bloodiest.

Assad’s government forces killed more than 30 people in Damascus on Saturday when they fired a mortar bomb into a funeral procession for a man who died in shelling a day before, said opposition activists.

Government forces pushed their way into Douma on the outskirts of the capital after weeks of siege and shelling. Fleeing residents spoke of corpses in the streets.

Britain’s ITV showed footage of clouds of black smoke over houses and said warplanes had struck at targets there.

Notably absent from the guest list were Iran, Syria’s closest regional ally, and Saudi Arabia, a foe of both Damascus and Tehran and leading backer of the rebel forces. Nor was anyone from the Syrian government or opposition represented.

He welcomed the fact that Russia and China had signed up to the idea for a transitional government. But he lamented that no agreement had been reached on the question of arms sales to Syria and any future action, including sanctions, at the Security Council.

China, which along with Russia have blocked tougher action against Assad, said on Sunday that foreign powers should not force a political solution in Syria.

The Geneva agreement also called for people to be free to demonstrate peacefully and the release of political detainees as well as an immediate halt to the violence.

Middle East analyst Hayat Alvi of the U.S. Naval War College said he doubted the Assad government would accept the plan and enforcement of it would be almost impossible.

“The U.S. and other Western powers will not find any flexibility on the part of the Syrian regime, and its allies, namely Russia,” he told Reuters from the United States.

“The proof is in the Assad regime’s continuous acts of violence against the Syrian people, even while the diplomatic wheels have been turning. The wheels clearly are going in circles without moving forward.”

That would likely be the scenario for months as long as Russia continued to support the Syrian government, Alvi said.

The conflict has evolved from peaceful protests against the Assad family’s four-decade rule to something akin to a civil war with a sectarian dimension.

The British-based Syrian Observatory for Human Rights said at least 56 people were killed across Syria on Saturday.

Syria’s border with Turkey was also tense after a Turkish military build-up in response to Syria’s shooting down of a Turkish warplane last week.

A Syrian witness said Turkish forces stationed on the border opposite the Syrian town of Jandaris fired machineguns in the air in response to Syrian army bombardment of rebel areas.