Millions without power in US after storm 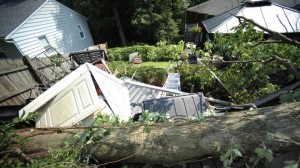 Washington, DC- Millions across the mid-Atlantic region sweltered in the aftermath of violent storms that pummeled the eastern U.S. with high winds and downed trees, killing at least 13 people and leaving 3 million without power during a heat wave.

Power officials said Saturday the outages wouldn’t be repaired for several days to a week, likening the damage to a serious hurricane. Emergencies were declared in Maryland, West Virginia, Ohio, the District of Columbia and Virginia, where Gov. Bob McDonnell said the state had its largest non-hurricane outage in history, as more storms threatened. “This is a very dangerous situation,” the governor said.

In West Virginia, 232 Amtrak passengers spent Friday night on a train that was blocked on both sides by trees that fell on the tracks, and they were waiting for buses to pick them up Saturday. In Illinois, storm damage forced the transfer of dozens of maximum-security, mentally ill prisoners from one prison to another.

In some Virginia suburbs of Washington, emergency call centers were out of service; residents were told to call local police and fire departments. Huge trees fell across streets in Washington, leaving cars crunched up next to them, and onto the fairway at the AT&T National golf tournament in Maryland. Cell phone and Internet service was spotty, gas stations shut down and residents were urged to conserve water until sewage plants returned to power.

The outages were especially dangerous because they left the region without air conditioning in an oppressive heat. Temperatures soared to highs in the mid-90s in Baltimore and Washington, where it had hit 104 ( 40 C) on Friday.

“I’ve called everybody except for the state police to try to get power going,” said Karen Fryer, resident services director at two assisted living facilities in Washington. The facilities had generator power, but needed to go out for portable air conditioning units, and Fryer worried about a few of her 100 residents who needed backup power for portable oxygen.

On Saturday night, the train passengers stranded near rural Prince, West Virginia, were loaded into buses after they got stuck at 11 p.m. the previous evening, said Amtrak spokesman Steve Kulm. Kulm said the train bound from New York to Chicago had power, so lights and air conditioning were working. He said that since it’s a long-distance train, it was stocked with food and crew members were able to get to town to buy more.

About 170 miles (274 kilometers) to the northeast in Morgantown, West Virginia, Jeff and Alice Haney loaded their cart at Lowe’s with cases of water, extra flashlights and batteries, and wiring for the generator they hoped would be enough to kick-start their air conditioner. Even if they had to live without cool air, the family had a backup plan.

No one was injured, Solano said. Generators are providing power to the prison, which is locked down, confining remaining inmates to their cells.

Utility officials said it could take at least several days to restore power to all customers because of the sheer magnitude of the outages and the destruction. Winds and toppled trees brought down entire power lines, and debris has to be cleared from power stations and other structures. All of that takes time and can’t be accomplished with the flip of a switch.

“This is very unfortunate timing,” said Myra Oppel, a spokeswoman for Pepco, which reported over 400,000 outages in Washington and its suburbs. “We do understand the hardship that this brings, especially with the heat as intense at is. We will be working around the clock until we get the last customer on.”

Especially at risk were children, the sick and the elderly. In Charleston, West Virginia, firefighters helped several people using walkers and wheelchairs get to emergency shelters

The storm that whipped through the region Friday night was called a derecho, a straight line wind storm that sweeps over a large area at high speed. It can produce tornado-like damage. The storm, which can pack wind gusts of up to 90 mph, began in the Midwest, passed over the Appalachian Mountains and then drew new strength from a high pressure system as it hit the southeastern U.S., said Bryan Jackson, a meteorologist with the National Weather Service.

“It’s one of those storms,” Jackson said. “It just plows through.”