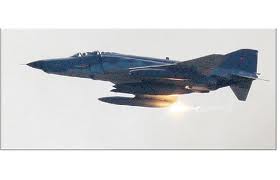 Beirut, Lebanon- Turkish military jet downed by Syrian antiaircraft batteries was back in “international airspace” when it was hit without warning after having inadvertently wandered into Syrian skies,Turkey’sforeign minister said Sunday.

Turkey is calling for a meeting this week of its allies in the North Atlantic Treaty Organization to discuss the incendiary issue, which has ratcheted up tensions between two nations already deeply divided over Turkey’s tacit support for rebels seeking to overthrow Syrian President Bashar Assad.

In Turkey’s most detailed explanation of the incident, the foreign minister dismissed speculation that the aircraft was on a spy mission or may have been testing Syria’s ground defenses or radar. He said the plane, with two pilots aboard, was on a routine test of Turkey’s radar system.

“Our plane briefly violated Syrian airspace, but not during the time it was shot down,” Davutoglu said.

The F-4 Phantom jet was hit about 15 minutes after having “momentarily” violated Syrian airspace, he said, according to Turkish news reports. 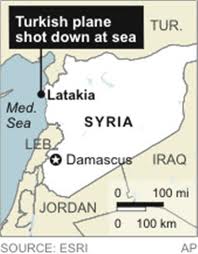 Syrian officials made no effort to contact the doomed aircraft or Turkish authorities, Davutoglu said, although the jet’s identity was not concealed and radio communications indicate that Syrian authorities were aware the plane was Turkish.

“A warning should be given” in such cases, Davutoglu said.

Syria has said its forces did not know the “unidentified aerial target” flying low and fast off its coast was a Turkish aircraft when it was shot down about midday Friday, apparently with a surface-to-air missile, sending it plunging into the eastern Mediterranean. Syria has so far adopted a conciliatory tone, denying it engaged in a “hostile act” against Turkey and explaining that it was defending its “sovereignty” against a perceived but not fully identified threat.

Davutoglu said his government would present its finding formally to the NATO military alliance this week and to the wider international community. NATO’s charter calls for consultations when a member state perceives a threat to its security.

Officials from both nations have avoided belligerent rhetoric since the jet was shot down. Diplomats fear that an armed confrontation between two regional powers could convulse the volatile Middle East.

U.S. Secretary of State Hillary Rodham Clinton on Sunday condemned the attack and confirmed that the issue would be brought before NATO members and the United Nations Security Council.

“The United States condemns this brazen and unacceptable act in the strongest possible terms,” she said. “It is yet another reflection of the Syrian authorities’ callous disregard for international norms, human life, and peace and security.”

At this point, neither Turkey nor Syria seems inclined to escalate the incident into a full-blown conflict between their large and powerful armed forces. Allies of the two nations are also likely to call for continued restraint, analysts said.

“I don’t foresee in the immediate period any kind of direct military confrontation between Turkey and Syria,” Fadi Hakura, an analyst with the London-based Chatham House think tank, told Al Jazeera, the pan-Arab satellite TV channel.

It was unclear what recourse Turkey would have, since it has already cut off diplomatic ties with Syria and imposed economic sanctions on its neighbor over Assad’s violent response to the Syrian opposition movement. The government in Ankara has pledged to act within the confines of international law.

“Turkey is not a country to give sudden and unrestrained reaction,” Davutoglu said, the Turkish English-language Hurriyet newspaper reported on its website. “No one should try to test the capacity of Turkey.”

Hope was fading Sunday for the two pilots. Turkish search teams, in coordination with Syrian authorities, have been scouring the suspected crash site. It was not known whether the pilots had been able to eject from the aircraft.

Turkish television said wreckage from the aircraft had been discovered more than 3,000 feet below the Mediterranean surface.

The incident has severely tested already strained relations between the neighbors.

Turkey has hosted a major rebel front, the Free Syrian Army, and an opposition political group, the Syrian National Council. But it has denied providing weapons to the rebels or facilitating arms transfers to them. The Turkish government has joined its Arab and Western allies, including the U.S., in calling on Assad to step down.

The Syrian government has accused Turkey of allowing arms and rebel fighters to infiltrate Syria from its territory. The nations share a border that extends more than 500 miles.

More than 30,000 Syrians escaping the fighting have fled into Turkey, where most are living in refugee camps. The 16-month-old rebellion in Syria has left at least 10,000 dead in what many fear could spiral into a sectarian civil war in the heart of the Middle East.