Morsi to take oath before parliament, not High Court 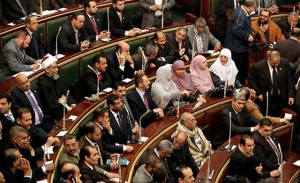 Saad El-Husseini, a member of the executive bureau of the Muslim Brotherhood’s Freedom and Justice Party confirmed on Sunday that president-elect Mohamed Mursi would take his oath of office before parliament and not before Egypt’s High Constitutional Court (HCC). He added that the results of Egypt’s presidential runoff had “served to confirm the popular desire for democracy and political change.”

A constitutional ‘addendum’ issued shortly after the ruling military council dissolved the People’s Assembly (the lower house of Egypt’s parliament) on15 June based on an HCC ruling, states that the new president should be sworn in before the HCC and not parliament. Mursi’s oath before the HCC, however, would imply his tacit acceptance of the addendum’s legitimacy and the dissolution of parliament, both of which the Brotherhood strongly opposes.