Mikati in Rio calls for shifting to green economy 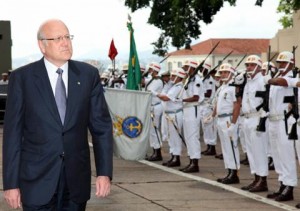 Lebanese Prime Minister Najib Mikati who is in Rio de Janeiro for the Rio+20 conference on the environment, called Thursday for shifting in Lebanon to an environmentally friendly economy and working on eradicating poverty, National News Agency reported.

As part of the conference, Mikati participated in an ESCWA-organized conference on regional organizations that work for green development and sustainability.

He said that although the Arab region welcomes “all global calls to strengthen the green economy, we are [also] completely aware that a green economy alone cannot resolve the current economic problems. Youth unemployment constitutes the most persistent challenge that our region, and country in particular, face.”

While in Rio , Mikati met Admiral Julio Soares de Moura Neto the commander of Brazil’s navy Thursday to thank him for Brazil’s contribution to UNIFIL.

Mikati said he and the Lebanese delegation could not “visit Rio without visiting the Brazilian navy to express … our love and thanks for the efforts you have made to help Lebanon under [the auspices of] UNIFIL. The work you are doing is very important, and it is a major support for the Lebanese Army.”

Leaders from the developing world sharply criticized their counterparts from richer nations during talks at the Rio+20 sustainable development conference on Thursday, citing what they said is the historic responsibility industrialized nations have to clean up the globe.

Cuban leader Raul Castro cited a long-standing argument of developing nations: that the old powers from Europe and the U.S. must contribute more in funds and efforts to clean up the globe and prevent climate change since they ate up more of the globe’s natural resources while working their way to developed-nation status.

Delegates from developed nations, meanwhile, said that a rapidly changing economic order and the rise of nations such as China, Brazil and India means that all nations must work together in protecting the environment.