26 die as last day of Iraq pilgrimage hit by bombs 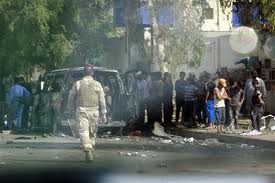 Two car bombs in Iraq’s capital killed at least 26 people Saturday on the last day of a Shiite pilgrimage already hit by multiple bombings. The blasts, one in a heavily guarded area close to a revered shrine, raised the week’s death toll to more than 100 and cast further doubt on the divided government’s ability to secure the country after the American withdrawal.

Black plumes of smoke filled the sky over Baghdad’s northern Kazimiyah neighborhood, where the shrine to eighth-century saint Imam Moussa al-Kadhim draws hundreds of thousands of pilgrims each year. One of the bombs tore into throngs of people who packed the streets nearby, carrying aloft symbolic coffins and beating their chests in mourning to mark his martyrdom.

Three days before, nearly two dozen coordinated bombs around the country killed 72 people. Al-Qaida’s Iraqi affiliate on Saturday claimed responsibility for that attack, which marked one of the deadliest days in Iraq since the last U.S. troops left in December.

The fierce wave of bombings targeting Shiites suggests that the al-Qaida-allied Sunni militants are stepping up their periodic attacks — which recently have come every few weeks — to try to exploit sectarian cracks in the elected government of Prime Minister Nouri al-Maliki and possibly spark another round of the bloodshed between Sunni and Shiite Muslims that brought Iraq to the brink of civil war only a few years ago. Shiite religious commemorations are frequent targets of these attacks, although overall levels of violence are still down considerably from then.

The sheer number of blasts during the al-Kadhim pilgrimage shows the ability of al-Qaida to retain and perhaps rebuild its bombings networks despite heavy blows struck to the organization by U.S. forces and allied Sunni militias prior to the American withdrawal. The bombers’ ability to penetrate so close to the shrine indicates the challenges faced by Iraq’s security forces in securing huge religious gatherings.

“Those behind the attacks, they’ve become more determined now and see more of an opportunity because of the dysfunctional political process,” said Salman Shaikh, director of the Brookings Doha Center and an analyst on regional politics.

The government is now split on mostly sectarian lines and over what critics say are al-Maliki’s increasingly authoritarian tendencies. Sunni and Kurdish politicians say he is trying to increase his power at their communities’ expense. While the wholesale violence between Sunni and Shiite neighborhoods and villages that killed tens of thousands in 2006 and 2007 has all but disappeared, the political tension has fostered a growing sense of pessimism.

“It’s a fairly bleak picture right now,” Shaikh said. He added, “This is quite depressing, considering we are approaching a decade since the initial invasion into Iraq.”

The U.S. hailed the invasion it led in 2003 to topple Iraqi dictator Saddam Hussein over his suspected weapons of mass destruction program as an opportunity to set up a model democracy in the Middle East. The U.S. troops left an elected government behind when they withdrew, but it still cannot provide basic services like reliable electricity.

Saturday’s bombings highlighted the relative weakness of Iraq’s security forces, unable to stop the attacks despite throwing up roadblocks, banning motorcycles and putting tens and thousands of police and soldiers around the city. After the explosions came grumblings that those measures were insufficient.

“There is no real security, no real searches,” said Mohamed Ali, who witnessed the first bombing in Shula, where authorities a few hours later were towing away the burned remains of a car. “Today is an exceptional day all security forces must be on high alert.”

The first car bomb went off just after noon, hidden in a taxi parked among a group of other cabs along the procession route. It killed 14 people including two policemen and wounding 46 others, a police official said. He spoke on condition of anonymity because he was not authorized to release the information.

An hour later, a second parked car exploded in the Kazimiyah neighborhood itself, about five kilometers (three miles) from the al-Kadhim mosque. At least 12 people were killed and 26 were wounded, the police official said.

It was unclear how the car had penetrated the tight ring of security thrown up around Kazimiyah after Wednesday’s multiple bombings. Police and soldiers had been searching vehicles and people at checkpoints leading into the neighborhood for days.

Despite the latest violence, Saturday’s commemorations for al-Kadhim continued. The crowds swayed and sang along with music played over the mosque’s loudspeakers and bands of men formed circles to dance and wail, throwing their hands in the air as they cried out for the imam. On the sidelines, people used hoses to spray water on the crowds to relieve summer heat that reached 47 degrees Celsius (117 degrees Fahrenheit).

“The terrorists will not discourage us,” vowed a song played over the mosque loudspeakers, promising to keep the centuries-old pilgrimage alive “even if they cut off our bodies into pieces.

The mosque opened its doors to the pilgrims on Saturday’s final day of the commemoration, allowing them to enter and pray at al-Kadhim’s shrine before filing out of another exit.

In 2005, the al-Kadhim procession was struck by another tragedy when thousands of Shiite pilgrims panicked by rumors of a suicide bomber broke into a stampede on a bridge, leaving some 1,000 of them dead. Police later said no explosives were found on the bridge, and poor crowd control and the climate of fear in Iraq appeared largely to blame.