by yalibnan
794
By Ruth Sherlock The sight that met the first United Nations observers to visit the Syrian hamlet of al-Qubeir yesterday was of homes gutted and burned. The smell in the air was rotting flesh.
Share: 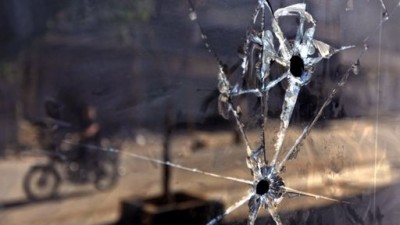 The sight that met the first United Nations observers to visit the Syrian hamlet of al-Qubeir yesterday was of homes gutted and burned. The smell in the air was rotting flesh.

On Wednesday, some 78 people were massacred inside this hamlet. Yesterday, farmhouses stood charred and abandoned, with pools of congealed blood in dusty streets. Fragments of mortar bombs lay mingled with cooking pots and other hurriedly abandoned possessions. Bloodstained clothes and shoes lay scattered. Flies buzzed around the bloated corpse of a donkey.

Then came evidence of the murders; a stick smeared in blood, bullet holes scarring a wall. One eyewitness saw a piece of brain outside a building. Others testified to the smell of burnt flesh.

“I have not seen anything like this since Bosnia,” said one UN monitor.

Laith al-Hemary, one of the few survivors, said: “The village is empty, there is nobody left. The houses are burned. The mosque is destroyed.

“The UN monitors saw the bullets and sticks that were used to kill people.”

No bodies were found in the village. Activists told the Daily Telegraph that many had been swiftly buried in line with Islamic tradition. “We waited and waited for the monitors to come on Thursday, but they did not. We held funerals and buried them,” said Mr Hemary.

Who perpetrated the crime has yet to proven. Residents described the massacre as an act of sectarian revenge, blaming pro-government militiamen from the minority Alawite sect of President Bashar al-Assad.

A 35-year-old female survivor using the pseudonym Fatma al-Hamory told the Daily Telegraph of the moment the attackers arrived. If true, her account implicates the regime’s security forces in a massacre that counted among the bloodiest incidents since the onset of Syria’s uprising.

“When it happened, I was 200 meters away,” she said. “I was taking some food to my brother who was out irrigating our land.

“[When the attack began] my brother ran back to our house. They [the perpetrators] shot him in the leg, and hit him at his head. And then they placed him on a tank and took him”.

“They were shouting; ‘Assad or we burn the country’.”

As the opposition Syrian National Council blamed the regime for the killings, rebel fighters went on the offensive against government forces.

Lieutenant Khaled Ali, spokesman for the opposition Military Council in the nearby city of Hama, said they undertook two operations yesterday, both in “revenge for the Qubeir massacre”. Rebels of the Free Syrian Army (FSA) attacked three checkpoints with rocket-propelled grenades, capturing one, and destroyed three tanks, he said.

The escalation reached the capital, Damascus, where a bomb was reported to have killed two soldiers on a military bus.

Describing the peace plan proposed by Kofi Annan, the former UN secretary general, as “dead”, Lt Ali added: “We have the capacity to step up operations more than this… but not to the point of winning control of the whole country if we do it alone. We are fighting a strong national army that has been arming itself for 40 years.”