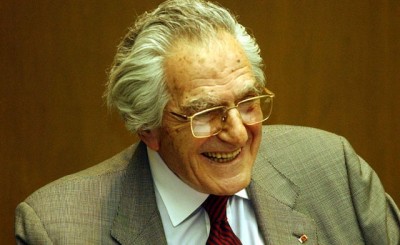 Ghassan Tueni, a veteran Lebanese journalist, politician and diplomat who headed one of the Arab world’s leading newspapers, An-Nahar, for half a century, died Friday after a long illness, his family said. He was 86.

Tueni passed away at the American University of Beirut Medical Center, where he spent his last weeks.

A fierce defender of Lebanese sovereignty and freedom of the press, Tueni was often referred to as the “dean of Lebanese journalism.”

Born on January 5, 1926 to a Greek Orthodox Christian family, Tueni studied at the American University of Beirut and went on to earn a master’s degree in political science from Harvard University in 1947. He returned to Lebanon and took over the An-Nahar newspaper, founded by his father, serving as its editor-in-chief and publisher for decades.

Known for his keen intellect and ambitious nature, Tueni branched into politics and served several terms in parliament and as head of several ministries, including higher education and social affairs. He was Lebanon’s ambassador to the U.N. between 1977 and 1982 at the height of the Lebanese civil war and is remembered for having stood before the Security Council and delivering an impassioned plea: “Let my people live!”

Tueni was a bold and outspoken journalist whose editorials published on An-Nahar’s front page every Monday morning were awaited by many in Lebanon and across the Arab world and landed him in jail on several occasions.

On the personal level, Ghassan Tueni’s life was marked with tragedy. His wife Nadia, a poet, died young after a struggle with cancer, as did his daughter, Nayla, at the age of seven. His son Makram died in a car accident in his youth.

His other son, outspoken journalist Gebran Tueni, was killed by a car bomb in Beirut in 2005 while serving as An-Nahar’s editor in chief.

At his son’s funeral, Tueni stood at the altar and pleaded, “Let us bury hatred and revenge along with Gebran.”

Shortly after the bombing, Tueni ran for his son’s seat in parliament and won uncontested. In 2008, following clashes between pro- and anti-Syrian factions, Tueni was among politicians who signed the Doha Agreement that ended Lebanon’s worst fighting since the civil war.

Tueni is survived by his wife, Shadia el-Khazen, and four granddaughters. His funeral will be held Saturday in Beirut.