US warns of pushing for chapter 7 to end Syria violence 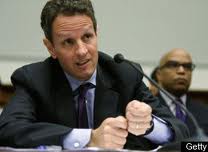 The Obama administration is warning Syria that U.N. sanctions may be near, as Secretary of State Hillary Rodham Clinton heads Wednesday to Turkey to talk strategy with America’s allies and look for a way to win Russia’s support for a transition plan ending the Assad regime.

The threatening message will be delivered by Treasury Secretary Tim Geithner, who will call for the world to exert “maximum financial pressure” on Syrian President Bashar Assad’s government after 15 months of violence. He will argue that “strong sanctions can help hasten the day the Assad regime relinquishes power,” but will acknowledge that financial and diplomatic penalties alone cannot bring the needed political change.

Geithner is expected to say that unless Syria demonstrates “meaningful compliance” with U.N. efforts to end the violence, the U.S. and other countries will “soon join in taking appropriate actions against the Syrian regime, including, if necessary, Chapter 7 action in the U.N. Security Council.” A Chapter 7 resolution authorizes actions that can ultimately include the use of military force, which administration officials — for now — are playing down as a possibility.

But Treasury officials said the U.S. goal in seeking U.N. action is global sanctions and not a military invention in Syria.

Despite widespread international condemnation of its actions, Syria’s government has survived through a combination of brutal repression and the political backing of Moscow. Along with China, Russia has twice blocked U.N. condemnations and punitive actions against the regime.

Looking for a way forward, Clinton is meeting Wednesday evening in Istanbul with likeminded European, Turkish and Arab officials hoping to advance a political transition strategy. The latest talk has focused on a plan such as the one agreed to last year by Yemen’s former dictator Ali Abdullah Saleh, whose resignation allowed his vice president to form a caretaker interim government.

But Assad has balked at such proposals, and the U.S. and its allies have yet to persuade the Kremlin to drop its support for the Syrian leader.

In recent days, Clinton has sought to open the door to a compromise with Russia, calling Assad’s ouster from power a necessary outcome of any political transition but not necessarily a “precondition.”

The nuance suggests the U.S. is willing to allow Assad to hang on in power for part of a structured regime change. But the administration is also making it clear that Assad’s eventual departure must be agreed on by all parties as part of the transition, and that it cannot accept Russian ideas about promoting reform or greater dialogue in Syria as a substitute for true political change.