Assad names a new prime minister as fighting rages on 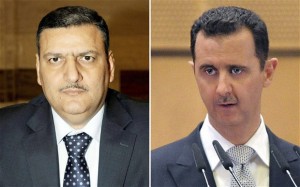 Bashar al-Assad has appointed Riad Hijab as new prime minister, tasking him with forming a government, as armed rebels continued to go on the offensive in and around Damascus.

There were also reports of clashes between Syrian troops and residents of the broder town of Arsal in eastern Lebanon after a Lebanese man was killed and two wounded at dawn.

The appointment of Mr Hijab comes after a new parliament was voted in on May 7 in elections boycotted by opposition groups.

Former agriculture minister Mr Hijab, 46, replaces former premier Adel Safar, who had formed his government in April 2011, one month after an Arab Spring-inspired uprising erupted across Syria, shaking the regime which responded with force.

According to figures of the Britain-based Syrian Observatory for Human Rights, more than 13,500 people, mostly civilians, have been killed in the uprising.

Mr Hijab was born in Syria’s eastern Deir Ezzor province and holds a PhD in engineering. He was appointed minister of agriculture in April 2011.

Prior to that, from 2004 to 2008, he served as head of the Ba’ath party in Deir Ezzor. He later became the governor of Quneitra province, near the border with Israel, and subsequently the governor of Latakia.

He is married with four children.

Hijab’s appointment comes days after a defiant Assad dismissed allegations that his government had a hand in last month’s Houla massacre and accused foreign-backed forces of plotting to destroy Syria.

“What happened in Houla and elsewhere are brutal massacres which even monsters would not have carried out,” Assad told the parliament on Sunday of the May 25 killing of 108 people, including 49 children, near the central town of Houla.

“The masks have fallen and the international role in the Syrian events is now obvious,” he said in his first address to the assembly since the parliamentary election.

The polls were the perfect response “to the criminal killers and those who finance them,” Assad said, stressing that his regime was determined to push through reforms but not at the expense of security.

Meanwhile The Syrian Observatory for Human Rights said violent clashes broke out in the Damascus suburb of Harasta overnight between regime troops and rebel forces.

The battles were “violent,” the monitoring group said, adding that “rebel forces clashed with troops at military intelligence headquarters and at a checkpoint.”

Rebel forces also clashed with regime troops at checkpoints near Douma, Irbin and Zamalka, all in the Damascus region, the Britain-based watchdog said.

Battles and shootings also erupted in several other neighbourhoods of the capital, including Tishreen.