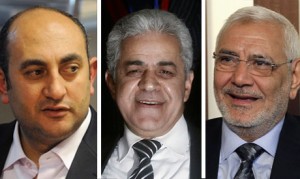 At the meeting, political figures are expected to discuss whether to back a particular candidate in a presidential runoff vote slated for 16 and 17 June, or boycott the poll altogether.

A first-round vote late last month eliminated all the candidates favoured by secular revolutionaries, leaving Muslim Brotherhood candidate Mohamed Mursi to face off against Mubarak-era minister Ahmed Shafiq, seen by many Egyptians as a ‘remnant’ of the former regime.

The choice has left revolutionary forces in a quandary, with many scrambling to forge a united front.

Since final voting results were announced on 27 May, several meetings and negotiations have taken place between Egypt’s various political forces.

One initiative launched by secular-revolutionary forces involves obtaining written guarantees from one of the two presidential finalists in exchange for support in this month’s runoff. These concessions include guarantees of inclusive, democratic governance, the drawing up of a viable constitution representative of all segments of Egyptian society, and maintenance of the state’s civil nature.

Ali and fellow eliminated candidate Amr Moussa have both been involved in the initiative – known as the ‘Document of the Pledge’ – which was initially organised by several political groups including the Egyptian Social Democratic Party (ESDP).

Eliminated moderate-Islamist candidate Abul-Fotouh met with the Brotherhood’s Mursi on Wednesday, where he asked the latter to sign a four-point guarantee that the Brotherhood would not use its newfound political clout to monopolise power.

Members of the Sabbahi campaign, for their part, have refused to meet with Mursi, stressing that their campaign had decided not to endorse either presidential finalist.

These efforts come amid an ongoing sit-in in Cairo’s Tahrir Square following Saturday’s controversial verdicts in the trial of ousted president Hosni Mubarak. The deposed president, along with a handful of others, was charged with ordering the killing of unarmed anti-regime demonstrators during last year’s Tahrir Square uprising.

Although Mubarak and long-time interior minister Habib El-Adly were both slapped with life sentences for “failing to prevent the murder of protesters” during last year’s uprising, six police chiefs were acquitted of all charges against them.

In a separate corruption case, meanwhile, Mubarak, his two sons, and Egyptian business tycoon Hussein Salem were all found not guilty.

Sabbahi, Abul-Fotouh, Ali and Mursi could all be seen in Tahrir Square on Saturday, chanting in support of protesters who continued to demonstrate in the flashpoint square on Sunday.