Egypt: Has the Arab Spring Returned? 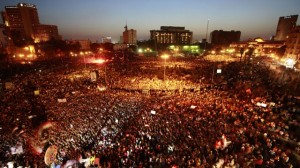 Thousands gathered in Cairo’s Tahrir Square today, and at almost 3 a.m. were still chanting that the revolution is back and the military government needs to go, creating speculation that the Arab Spring has returned.

The crowds gathered today after a court sentenced Hosni Mubarak, the embattled and ailing former ruler who led Egypt with an iron first for 30 years, to life in prison for his role in the killing of more than 800 protesters who were demanding he step down. The charges carried a possible death sentence, but the judge chose life imprisonment instead.

There were celebrations in the streets when the verdict was announced, but it was short-lived, as protesters learned of the mixed verdict: While Mubarak was sentenced to life in prison, he and his two sons were acquitted of corruption charges.

Other senior government officials were acquitted, leaving no one found guilty of ordering the deaths of protesters last year.

“The people want the execution of the murderer,” the crowd chanted.

Some on the streets carried banners that read “God’s verdict is execution,” while others in the city of Alexandra chanted “We are done with talk; We want an execution.” Still others spread posters of Mubarak on the ground and walked over them.

Thousands of riot police in helmets and shields were needed to contain the restive, anti-Mubarak crowd outside the court. So far, the demonstrations have been relatively non-violent, although there have been several unconfirmed reports of sexual harassment on Twitter.

The “Black” Years: “Darkness That Resembled a Winter Night”

Mubarak, once a key U.S. ally and one of the longest standing Arab leaders in modern history, sat stone faced in court as Judge Ahmed Rifat read his verdict.

It began with words that just two years ago, would have been unthinkable.

“The people released a collective sigh of relief after a nightmare that did not, as is customary, last for a night, but for almost 30 black, black, black years — darkness that resembled a winter night,” he said.

“The revolution by the people of Egypt was inspired by God. They did not seek a luxurious life or to sit atop the world, but asked their politicians, rulers and those in authority to give them a decent life and a bite to eat,” he said.

“They peacefully demanded democracy from rulers who held a tight grip on power.”

Following the verdict, Mubarak suffered a “health crisis” on a helicopter en route to Cairo prison hospital, where he is expected to serve out his sentence. State media reported it as a heart attack, but it could not be independently confirmed.

Officials say that upon arrival, Mubarak refused to leave the helicopter for a full two hours, insisting instead that he be taken to a military hospital on the outskirts of Cairo, where he has stayed since his trial began in August.

Before that, Mubarak had been staying in a hospital in the Red Sea resort town of Sharm el Sheikh, where he reportedly had privileged access to health facilities, a swimming pool, and received visits from other Gulf rulers.

Inside the courtroom, a scuffle broke out as soon as the verdict was read. Although Mubarak was convicted for his role in suppressing the uprising, he and his sons, Gamal and Alaa, along with a family friend, were acquitted of corruption charges. Because of other, pre-existing charges against Gamal and Alaa that have yet to be heard in court, the two brothers will remain behind bars.

A number of revolutionary groups, including the powerful Muslim Brotherhood, which was outlawed during Mubarak’s regime, called for massive protests at Tahrir Square, the symbolic home of the uprising. Many were upset that Mubarak wasn’t found guilty on all charges. They said the verdict was an indication that the old Mubarak regime is still influencing the judiciary.

Human Rights Watch called the verdict a landmark, but criticized the prosecution for failing to fully investigate the case.

“It sends a powerful message to Egypt’s future leaders that they are not above the law,” HRW spokesman Joe Stork said. “These convictions set an important precedent since just over a year ago, seeing Mubarak as a defendant in a criminal court would have been unthinkable.”

Egypt Set for a Runoff in Presidential Elections

The verdict comes at a crucial time, with the country set for a run-off tiebreaker in its president elections. The showdown is a contest between Ahmed Shafiq, a former protégé of Mubarak’s, and Mohammed Morsi, the leader of the Muslim Brotherhood.

On his Facebook page, Shafiq declined to comment on the court ruling, but said it shows no one is above the law in Egypt, and that the old regime would never come back.

In contrast, a spokesman for Morsi called the verdicts “shocking” and vowed retribution.

“I am part of this people who lived for decades under oppression. The blood from the martyrs’ wounds is still running. I was, and still am, and will remain a revolutionary until the revolution’s aims are realized,” said Morsi in a press conference, according to the Egypt Independent.

Morsi and Shafiq will go on a head-to-head presidential runoff on June 16-17.