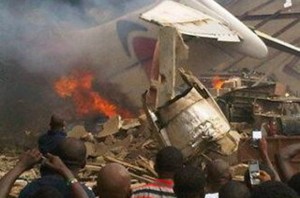 Nigeria’s aviation ministry said Sunday that 147 people were aboard a Dana Airlines passenger jet that crashed into a two-story building in Lagos, the country’s largest city. “I don’t believe there are any survivors,” said Harold Denuren, Nigeria’s director of aviation.

The flight originally was reported to have been carrying 153 people, but the Civial Aviation Authority said in a statement that 147 people were on board.

The plane was heading from Abuja, the capital, to Lagos when it went down about 3:30 p.m. local time (10:30 a.m. ET), The Sun newspaper of Lagos reported. It crashed into a building and split into two before burning up, witnesses said.

Local reports indicated that at least three buildings were severely demaged, one of them a church. Nigerian Eye reported from the scene that bodies could be seen burning on the ground, while pictures on the Internet showed large plumes of smoke across the city.

Al Jazeera reported from Abuja that witnesses said the the plane may have hit a power line in clear and sunny weather.

The crash came after 10 other people were killed when a Boeing 727 cargo plane flying from Lagos crashed Saturday in Accra, the capital of Ghana, and hit a bus, the Sunday Tribune of Nigeria reported.

A senior military officer told the Sunday Tribune that the bus was severely damaged, while the plane’s wings and tail broke off from its body.