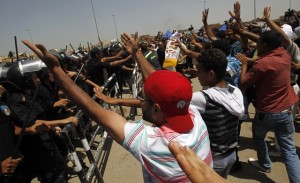 Deposed Egyptian president Hosni Mubarak and other defendants standing trial with him must be retried with solid evidence, the Muslim Brotherhood said in a statement issued on Saturday by the campaign of its presidential candidate.

“The public prosecutor did not carry out its full duty in gathering adequate evidence to convict the accused for killing protesters,” said Yasser Ali, official spokesman for the Mohamed Mursi campaign.

An Egyptian judge convicted Mubarak earlier in the day of complicity in the killings of protesters during the uprising that ended his 30-year rule and sentenced him to life in prison.

Meanwhile, a defense lawyer told AFP that that the sentence will be appealed.

“We will appeal. The ruling is full of legal flaws from every angle,” said Yasser Bahr, a senior member of Mubarak’s defense team.

Asked if Mubarak was likely to win the appeal, Bahr said: “We will win, one million percent.”

Egypt’s general prosecutor ordered Mubarak to be transferred to Tora prison on the outskirts of Cairo, the state news agency reported. The helicopter that took him from court had landed at Tora.

Protesters have long demanded that Mubarak be moved from the hospital to Tora, where other defendants have been held during the trial. In the past, officials said Tora prison hospital was being prepared to treat Mubarak, who has always appeared in court on a hospital gurney suffering undefined ailments.

The protesters also clashed with police outside the courtroom building, witnesses said. Protesters threw rocks at riot police standing guard outside the building and the security forces gave chase, they added.

People had different opinions and reactions towards the verdict.

Outside the court, there were celebrations, with many chanting “God is greatest.” Soha Saeed, the wife of one of those killed in the uprising that toppled Mubarak on Feb. 11, 2011, shouted: “I’m so happy. I’m so happy.”

But one man held up a sign calling for Mubarak to be executed, others chanted for a death sentence.

Angry families of protesters that were killed during the January 25 Revolution slammed the verdict by demonstrating in Tahrir Square. The families called for a death sentence to be handed in for Mubarak.

To eliminate more protesters pouring in Tahrir Square, the police blocked the entrance to the square, Al Arabiya correspondent reported, adding that the angry demonstrators warned of escalation of their protests.