by yalibnan
942
If there is no foreign military intervention, Syria is heading into a prolonged civil war like Lebanon’s in 1975-1990. The ethnic and religious divisions in Syria are quite similar to those in Lebanon.
Share: 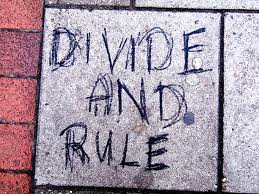 Russia is at last admitting that Syria is using heavy weapons against its own civilian population. It could hardly do less, given the scale of Saturday’s massacre in the village of Taldou in the Houla region: at least 108 civilians killed, including 49 children.

But while other countries are expelling Syrian ambassadors, Russia’s Foreign Minister Sergei Lavrov is still trying to spread the blame in order to protect Bashir al-Assad’s regime from foreign intervention.

Some of the victims in Houla had been shot at close range or knifed to death. Assad’s propagandists insist that the fighters of the Syrian opposition (the “armed terrorist gangs,” as the regime calls them) massacred their own people with rifles and knives in order to put the blame on the government, and Russia is actively promoting the same story. But it is nonsense, and Lavrov must know it. 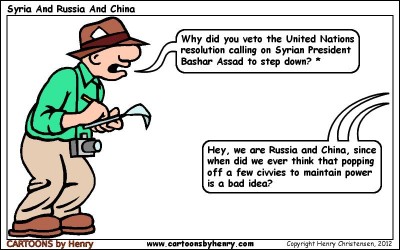 The testimony of eyewitnesses is consistent: After two hours of shelling by the Syrian army, armed men belonging to the pro-government Shabiha militia entered the village and went door to door killing suspected activists and their families. Damascus doesn’t care that everybody knows it’s lying: the whole point of the massacre is to terrify Syrians into submission, and it knows NATO will not intervene.

The brazen effrontery of the Assad regime in perpetrating such a massacre — even after United Nations/Arab League monitors have entered the country — shows how confident it is that the Western alliance will not use force against it.

NATO will not go beyond empty threats because it cannot get the support of the U.N. Security Council for using force against Assad’s regime (the Russians and the Chinese would veto it) and because Syrian armed forces are so big and powerful that it would suffer significant losses if it attacked.

If there is no foreign military intervention, Syria is heading into a prolonged civil war like Lebanon’s in 1975-1990. The ethnic and religious divisions in Syria are quite similar to those in Lebanon. If the Syrian regime understands that, why does it persist in killing the protesters? Because it reckons that fighting a prolonged civil war is better than losing power now.

The pro-democracy protests in Syria began soon after the triumph of the Egyptian revolution in February 2011, and for six months they remained entirely non-violent despite savage repression by the regime.

Assad’s strategy for survival had two main thrusts. One was to divide the opposition. At the start the protests included Christians, Druze and even some people from Assad’s own community, the Alawites. He needed to separate those minority groups from the majority of the protesters, the Sunni Muslims who make up 70 percent of Syria’s population.

His other goal was to lure the protesters into using force, because that would license his army to use far greater force against them. Eventually, in October/November, deserters from the Syrian army (who took their weapons with them) began shooting back at Assad’s troops, and he had his pretext. After that, he was free to use artillery against city centers, slaughter whole villages, whatever he liked.

The shift to open warfare also had the effect of frightening most Christians, Druze and Alawites back into the regime’s camp. They bought the regime’s lies about the resistance being run by Sunni Islamist fanatics with al-Qaida connections (although it is nothing of the sort), and decided that even Assad and his henchmen were better than a democracy that brought vengeful Sunni Muslims to power.

So Assad now has about 30 percent of the population on his side, plus most of the army, all of the heavy weapons and the world’s nastiest intelligence services. That’s enough to fight a long civil war — and maybe enough to win it.

Russia and China will guard Assad’s diplomatic flank, and the other Arab states will do nothing beyond sending some money and a few weapons to the rebels. Former U.N. Secretary-General Kofi Annan’s six-point peace plan is a dead letter, and NATO will not intervene militarily. Civil war is Assad’s best option for survival, and he’s not stupid.