What happened at Syria’s Houla massacre? 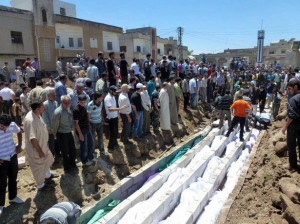 The trenches in the earth are seen in videos uploaded by activists, filled with the mangled corpses of more than 100 people, many children.

As the world condemns the Syrian regime for Friday’s massacre in Houla, one of the worst attacks in the 15-month uprising, the identity of those responsible for the slaughter remains uncertain.

The death toll is at 108 people, including 49 children and 34 women, according to UN observers.

It began just after midday prayers in Taldou, a village southeast of the main town, also called Houla.

The farming area comprised mainly of Sunni Muslims has grown more politically active in recent months, according to German weeklyDer Spiegel. The city of Homs, a rebel stronghold that has endured siege and relentless shelling from the Syrian army, lies just 20 kilometres to the southeast.

Last winter, a unit of the Free Syrian Army rebel forces moved into Houla, giving the residents the confidence to speak out against Bashar Assad’s regime.

Which is what happened Friday.

A crowd of protesters gathered in Taldou at about 1:30 p.m. The army forces stationed at a number of checkpoints around Houla tried to disperse the group with bursts of machine-gun fire.

Opposition reports say five people were killed, and in response, the rebels attacked two of the army roadblocks.

So the army began shelling the town with tanks, and later with mortars.

Then gun-toting men dressed in military fatigues moved into the neighbourhoods, where families were hiding in their concrete-walled homes.

Some local activists and eyewitnesses say they were from the Syrian army. Others say they were members of the shabiha, the pro-Assad militia that entered Houla from the Alawite villages that ring the township. (The shabiha is predominantly Alawite, the sect of Shia Islam that Assad belongs to.)

The Syrian government says the men were terrorists.

Just before sunset, the gunmen arrived at homes on the outskirts of Houla, according to witnesses interviewed by Human Rights Watch.

“They walked in the house; I didn’t hear them break in because we never lock the doors,” said an elderly woman who survived the attack. “After three minutes, I heard all my family members screaming and yelling. The children, all aged between 10 and 14, were crying. I went down on the floor and tried to crawl so I could see what was happening.

“As I approached the door, I heard several gunshots. I was so terrified I couldn’t stand on my legs. I heard the soldiers leaving. I looked outside the room and saw all of my family members shot. They were shot in their bodies and their head.”

The violence lasted until the early hours of the morning. UN observers report that many were shot at point-blank range or stabbed.

Unverified videos uploaded by Syrian pro-democracy advocates show bodies lying in pools of blood on the floor or sprawled on beds next to blood-spattered walls. One video shows the blood-covered bodies of young children laid out in rows on mats.

“It has been confirmed that hundreds of gunmen gathered at two o’clock on Friday afternoon, using pickup cars loaded with up-to-date and heavy weapons, like mortars, machine guns and anti-tank missiles,” he told reporters.

Law enforcement officers never left their positions and were in a state of self-defence during what became a nine-hour battle, he said.

Maj.-Gen. Robert Mood, chief of the UN observer mission in Syria, said an investigation to uncover the truth is ongoing.

However, the UN Security Council has already condemned the Syrian government for the mass killing, joined by countries around the world — including Syria’s closest ally Russia, which said Monday both the regime and the rebel forces were to blame.

On Monday, UN envoy Kofi Annan arrived in Damascus for two days of negotiations and said he expected to hold “serious and frank” talks with Assad, the Washington Post reported. He asked all sides of the conflict to lay down their weapons and end the bloodshed.

“This message of peace is not only for the government, but for everyone with a gun,” he said.

Meanwhile, activists reported Monday that at least 24 people died in the city of Hama in shelling by government forces.

Photo: People gather at a mass burial for the victims of a massacre in the Syrian region of Houla on Saturday. UN observers in Syria have confirmed that artillery and tank shells were fired in Friday’s attack and at least 108 people were killed.