UN: Most of 108 killed in Houla Syria were executed

The U.N.’s human rights office on Tuesday added grim new details about the massacre of more than 100 people in a rural area in Syria last week, saying that most of the dead were shot at close range, some of them women and children killed in their homes.

The brutality of the Houla killings, documented in gruesome amateur videos of scores of bodies laid out before burial, sparked widespread international outrage and raised new questions about the ability of an international plan to end 15-months of violence in Syria.

The U.N. said that at least 108 people, including 34 women and 49 children, were killed in an attack that began on Friday and continued through the night on Houla, a group of poor farming villages northwest of the central Syrian city of Homs.

On Tuesday, spokesman Rupert Colville of the U.N. High Commissioner for Human Rights said U.N. monitors who visited the area found that fewer than 20 of the dead were killed by artillery fire. The rest appeared to have been shot at close range.

“What is very clear is this was an absolutely abominable event that took place in Houla, and at least a substantial part of it was summary executions of civilians, women and children,” he told reporters in Geneva. “At this point, it looks like entire families were shot in their houses.”

Colville said information from U.N. observers and other sources indicated that many of the victims were killed in the village of Taldaw in two separate incidents. Locals blamed the killings on pro-regime militias known as shabiha, which sometimes act “in concert” with government forces, he said.

He said a fuller investigation was needed before he could comment on that, and called on Syria to allow free access to U.N. investigators.

The killings have emerged as a potential turning point in Syria’s conflict, prompting the strongest condemnation yet from Russia, a staunch Syrian ally.

Annan is trying to salvage a peace plan for Syria based on a cease-fire that was supposed to begin on April 12 but has never really taken hold, casting doubt on the rest of the plan.

Anti-regime activist posted videos online of explosions in the villages of Houla, dismembered bodies lying in the streets, then row upon row of dead laid out before being buried in a mass grave. Some of the videos showed dozens of dead children, some with gaping wounds.

Houla activists reached by Skype said government troops shelled the area after anti-government protests on Friday and clashes with local rebels. Later, shabiha from nearby villages swept through the area, stabbing residents and shooting them at close range. 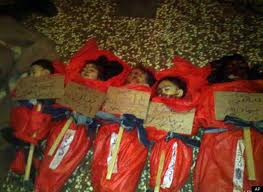 Assad’s regime has denied any role in the massacre, blaming the killings on “armed terrorists” who attacked army positions in the area and slaughtered innocent civilians. But it has provided no evidence to support its narrative nor has it given a death toll.

U.N. observers said they found tank and artillery shells in Houla after the attack, but stopped short of blaming regime forces for Friday’s killings.

The new information provided by the U.N. draws attention to the role of the shabiha in 15 months of violence in Syria. Assad’s government often deploys pro-regime thugs or armed militias to repress protests or carry out more military-style attacks on opposition areas.

They frequently work closely with soldiers and security forces, but the regime never acknowledges their existence, allowing it to deny responsibility for their actions.

A Syrian official on Tuesday again denied any involement.

“It is irrational that any party who wants to make Annan’s mission a success would ever commit such a massacre,” Deputy Foreign Minister Faisal Mekdad told reporters Tuesday. He said Syria remained committed to Annan’s plan and “had not committed a single violation.”

Activists have posted videos of tanks and armored vehicles in the middle of cities, a violation of the plan, and U.N. observers said they found spent tank and artillery shells in Houla after the massacre there. Funeral videos have also shown local rebels among the mourners — making it unlikely they carried out the killings. 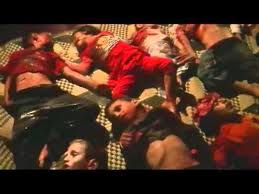 Syria is a vital geopolitical linchpin, and there are fears that the unrest will lead to a broader regional conflict.

Already, the violence has seeped outside Syria’s borders over the past several months.

On Tuesday, 17 Syrians reportedly wounded in clashes in northern Syria crossed into Turkey, where one died in a Turkish hospital, Turkey’s state-run Anadolu Agency said. Two others died before reaching the Turkish border, it said.

Syria’s unrest began in March 2011, with protests calling for political change. Government troops swiftly cracked down at the uprising spread, and many in the opposition have taken up arms to defend their towns and attack government troops.