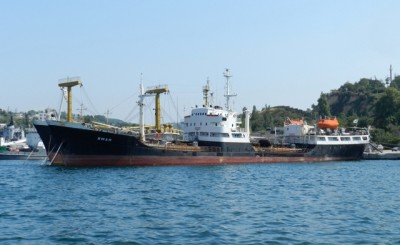 A Russian cargo ship loaded with weapons is en route to Syria and due to arrive at a Syrian port this weekend, Al Arabiya television said in a report that Western diplomats in New York described on Friday as credible.

Syria is one of Russia’s top weapons customers. The United States and European Union have suggested the U.N. Security Council should impose an arms embargo and other U.N. sanctions on Syria for its 14-month assault on a pro-democracy opposition determined to oust Syrian President Bashar al-Assad.

But Russia, with the support of fellow veto power China, has prevented the council from imposing any U.N. sanctions on Syria and has refused to halt arms sales to Damascus.

“Al Arabiya have learned that a Russian cargo ship carrying a large amount of weapons plans to unload its cargo in the Syrian port of Tartus,” the broadcaster said on its website on Thursday.

The report said the ship left a Russian port on May 6 and cited a “Western source” as saying that it will dock at Tartus on Saturday.

“The ship is trying to conceal its final destination in a suspicious way,” Al Arabiya said.

Western diplomats and officials said the report was credible.

In a letter to the U.N. Security Council, Secretary-General Ban Ki-moon said he had seen reports of countries supplying arms to the government and rebels. He urged states not to arm either side in the Syrian conflict.

“Those who may contemplate supporting any side with weapons, military training or other military assistance, must reconsider such options to enable a sustained cessation of violence,” he said.

Russia has defended its weapons deliveries to Syria in the face of Western criticism, saying government forces need to defend themselves against rebels receiving arms from abroad. Damascus says Qatar, Saudi Arabia and Libya are among the countries helping the rebels.

Diplomats said the Russian firm might have been acting on behalf of state arms exporter Rosoboronexport, though that was not clear. What is clear, they said, is that the weapons were intended to help Syrian President Bashar al-Assad, a staunch ally whom Moscow continues to support.

“I don’t have any information on this ship, but our policy is not to comment on individual shipments, regarding contents or timing,” a spokesman for Rosoboronexport, Vyacheslav Davidenko, said in Moscow.

The Russian Foreign Ministry said it did not have information that a ship was headed to Tartus with weapons and declined further comment.

U.S. State Department spokeswoman Victoria Nuland was asked about the Al Arabiya report at her daily briefing in Washington.

“I had not seen that report,” she told reporters. “You know how strongly we feel that no country should be delivering weapons to the Assad regime now.”

U.N.-Arab League envoy Kofi Annan has also urged countries not to supply weapons to either side in the conflict. Annan plans to visit Damascus soon, his spokesman said on Friday.