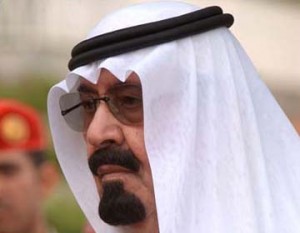 Violence linked to the Syria conflict has spilled over into Lebanon, where soldiers on Sunday shot dead a prominent Sunni cleric and a member of a Lebanese political alliance against Assad in the northern city of Tripoli.

It has long viewed the Assad government with distrust, pointing to its alliance with Shi’ite Iran which Saudi Arabia suspects of stirring up unrest in neighboring Bahrain and among its own Shi’ite minority.

Riyadh has led Arab efforts to isolate Assad’s government to end its suppression of a year-long revolt and has called for Syrian rebels to be armed.

“Saudi Arabia is deeply concerned and is following up on the recent developments of Tripoli events, especially the targeting of a main sect in the country’s social fabric,” Saudi state news agency SPA citied King Abdullah as saying in a letter to Lebanese President Michel Suleiman.

“Due to the gravity of the crisis and the possibility of it causing a sectarian strife in Lebanon and bringing it back to the shadow of the civil war, we are looking to your… attempts to interfere to end the crisis… and keeping Lebanon away from foreign struggles especially with the Syrian crisis nearby.”

The killing of the anti-Assad Sunni cleric in Lebanon, which followed battles in the Lebanese city of Tripoli between factions opposed and loyal to Assad, triggered street fighting in the capital of Beirut.

The clashes in Beirut were the worst since 2008 sectarian fighting that brought back memories of Lebanon’s 15-year civil war.

The United Arab Emirates and Kuwait have urged their citizens to stay away from Lebanon – a favorite destination for wealthy Gulf tourists – citing security concerns in the country.

Saudi Arabia’s ambassador to Lebanon last month warned Saudis to stay away from Lebanon’s border areas, after two Saudi citizens were kidnapped and tortured for eight days, before being freed in a joint Saudi-Lebanese operation.