Official: Lebanese abducted in Syria soon to be freed 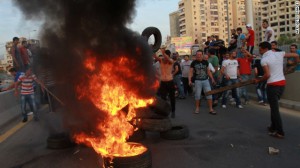 The pilgrims — all men — were detained Tuesday by an armed group in northern Syria soon after crossing the border from Turkey. They were on their way back from visiting holy sites in Iran.

The pilgrims’ wives were not detained but sent to the city of Aleppo; from there they returned to Lebanon. After arriving in Beirut late Tuesday night, one of the women accused the rebel Free Syrian Army of being behind the abductions.

“After we crossed into Syria from the Turkish border, there was a white car full of armed men,” the woman told a Lebanese television network without giving her name.

“They stopped our bus after they pointed their weapons at us. They said that they are the Free Syrian Army and want to get us away from the shelling. But they were aiming to abduct the men.”

Another relative of one of the abducted men told Reuters Tuesday: “The Free [Syrian] Army is demanding in return for releasing these men to have Free Syria Army rebels held by the regular army to be released. So they told them, go back to Lebanon and tell them to negotiate with us.”

Free Syrian Army spokesman Khaled Youssef Hammoud, in an interview with Lebanon’s Future TV, denied that the FSA had anything to do with the abductions.

The incident has raised communal tensions in Lebanon, with protesters in the mainly Shiite areas of southern Beirut taking to the streets again Wednesday. The road to Beirut Airport was blocked for a short time.

Hassan Nasrallah, leader of Hezbollah — the largest Shiite party in Lebanon — has urged all Lebanese to show restraint and not cut off roads or burn tires. “You can demonstrate peacefully in squares but not stop the daily life in Lebanon,” Nasrallah said.

There have been deadly clashes between Sunni and Alawite groups in the city of Tripoli in northern Lebanon, where the sectarian fault lines are similar to those in Syria. Syrian President Bashar al Assad and many of Syria’s ruling elite are Alawite. The clashes followed the arrest of a prominent Sunni cleric in Tripoli — Shadi al-Moulawi — who was charged with being a member of a terrorist organization. His supporters said he was helping Syrian refugees.

The Lebanese cabinet held an emergency session Wednesday to discuss security issues and rising tensions linked to events in Syria — as well as the case of the kidnapped pilgrims.

Ali Ammar, a member of parliament from Hezbollah, said negotiations to release the pilgrims should remain secret. He appealed to their families to be patient and hopeful.

But there is growing anger in the southern suburbs of Beirut, where the families of the abducted live. As officials promise the quick release of the pilgrims, some Shia in Hezbollah strongholds are beginning to show their impatience.