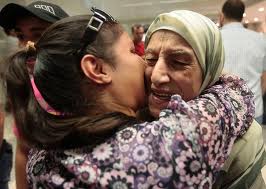 Several dozen women who were part of a group of Lebanese Shi’ites kidnapped in Syria arrived in Beirut early Wednesday after being freed by their captors.

Television video showed the women being greeted by relatives as they arrived at the airport.

The women were among a group of pilgrims transiting Syria by bus after visiting holy Shi’ite shrines in Iraq. Gunmen stopped and boarded their bus. About 11 men who were on board are still being held captive.

One woman told the Reuters news agency the captors claimed they were part of the opposition Free Syrian Army. Members of the Free Syrian Army denied the group was responsible.

Meanwhile, the head of Lebanon’s powerful Hezbollah militant group appealed for calm after the protests erupted in Beirut following the kidnappings.

Sheikh Hassan Nasrallah urged restraint in an address broadcast by Lebanese television stations, saying contacts with Syrian authorities were under way for a quick resolution.

The British-based Syrian Observatory for Human Rights said a bomb attack at a Damascus restaurant killed five people on Tuesday. The group also says there was heavy shelling in the Hama region.

The state-run SANA news agency says an armed terrorist group shot and killed a law enforcement officer and a civilian in the Homs region. It also says an unspecified number of “terrorists” were killed while making an explosive device in Homs.

The government has blamed much of the country’s unrest on armed groups or terrorists.