Cabinet may quit, to be replaced by neutral one 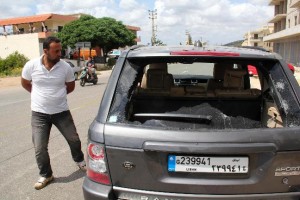 Al Jumhuriyah newspaper reported on Monday that the discussions over the resignation of the cabinet of PM Nagib Mikati have been accelerated during the past 24 hours. It will be replaced by a neutral cabinet of technocrats that will also be headed by Mikati.

The deterioration of security in the country was reported as the main reason behind the discussions, specially since Lebanon has became ” the eye of the storm” as a result of the Syrian uprising, according to the daily

on Saturday three key Gulf countries issued travel advisories in which they prevented their citizens from visiting Lebanon, citing security as the main concern

Photo: The car of the anti Syrian regime cleric Sheikh Ahmad Abdel Wahid in which he was killed on Sunday May 20, 2012. The military public prosecutor has reportedly detained 3 army officers and 19 soldiers in connection with the killing of the Muslim cleric. Army chief general Jean Kahwaji appealed for calm and told the people of Akkar that whoever is behind the killing will be arrested no matter who and told them the army is yours, not your adversary.