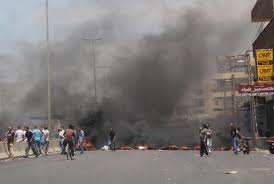 Al-Jadeed television reported early Monday morning that following the deployment of the Lebanese troops in Beirut’s Tariq al-Jedideh district they discovered that three people were killed in the clashes and several were injured.

The army also reported that several buildings were damaged as a result of the clashes in which RPGs were used.

Meanwhile, the National News Agency reported that RPGs were being used in clashes around the Beirut Arab University in Tariq al-Jedideh between “two local parties.” However, it did not clarify to whom it was referring.

Earlier on Sunday, the murder of the anti Syrian cleric Sheikh Ahmad Abdel Wahid and his bodyguard Mohammad Hussein Merheb sparked tension in several Lebanese areas leading protesters to block roads throughout Lebanon including the capital

According to local reports army troops shot dead the Sunni cleric and his bodyguard, when his convoy failed to stop at a checkpoint in North Lebanon.

According to local reports The military public prosecutor has detained 3 army officers and 19 soldiers in connection with the killing of the Muslim cleric.