9 wounded in Beirut protests against murder of cleric 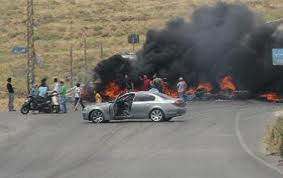 Protesters blocked several roads on Sunday all across Lebanon, including the capital Beirut, to to protest against the murder of Sheikh Ahmed Abdel Wahid.

Sheikh Abdel Wahid was killed at an army checkpoint in the Akkar town of al-Kweikhat on Sunday .

Residents set fire to tires to cut off the roads. Here are some of the main roads that were blocked on Sunday.

Deir Zannoun road , east of the town of Zahle

Verdun Road in west Beirut near the army barracks

The road leading to the sports stadium in west Beirut

Sheikh Bechara road leading the the center of Beirut

Most roads in Akkar and Tripoli area in north Lebanon

Meanwhile, National News Agency reported that nine people were wounded in an armed clash between two local groups in the vicinity of the Beirut Arab University in Tariq al-Jedideh, which involved the use of machineguns and rocket-propelled grenades.

Update: The military public prosecutor has detained 3 army officers and 19 soldiers in connection with the killing of the Muslim cleric