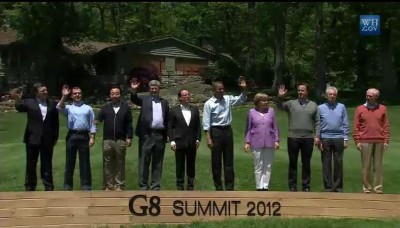 Leaders from the Group of Eight nations sought to smooth over disagreements about how to contain Iran’s nuclear ambitions and stem violence in Syria, as Russia warned Western powers that they should approach Middle East disputes with more delicacy.

“In Middle Eastern policies we should play chess not American football,” said Mikhail Margelov, head of the international affairs committee of the Russian parliament’s upper chamber, to reporters. “Nobody wants Iran to have a nuclear bomb. The question is how to achieve this goal.”

The Russian comments were made at the G8 summit, hosted by President Barack Obama at the presidential retreat in Camp David, Maryland. Russian President Vladimir Putin declined to attend the meeting, sending Prime Minister Dmitry Medvedev in his place. 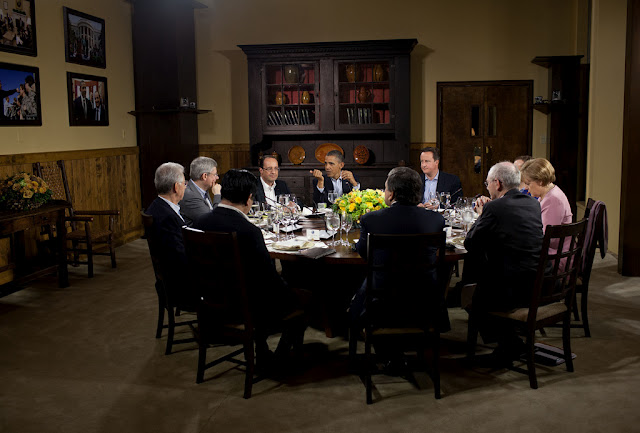 How to stop Iran’s nuclear weapons program was the dominant foreign policy concern. The prospect of confrontation in a region with more than half the world’s oil reserves has sent crude prices soaring. G8 leaders also broached the use of strategic reserves to make up for potential supply shortfalls when a European Union ban on Iranian imports begins July 1.

In Syria, where Western leaders insist President Bashar al-Assad has lost legitimacy and should leave office, Margelov said, “there can’t be any forceful displacement of the regime.” The crisis in Syria is “impossible to cut with an ax, you need to act with tweezers,” he said.

Russia sells arms to Syria, its most important ally in the region.

Obama said last night’s discussions on security were “frank and useful.” In opening remarks today, he said the G8 “are firmly committed to continuing with the approach of sanctions and pressure in combination with diplomatic discussion and our hope is that we can resolve this issue in a peaceful fashion.”

Still, Russia has ruled out stiffer sanctions at the United Nations, where the fourth and last round of sanctions passed in 2010. Since then, the mood in the Security Council soured over the NATO bombing in Libya and the 14-month conflict in Syria.

Crude oil for June delivery fell US$1.08 to US$91.48 a barrel on the New York Mercantile Exchange, the lowest settlement since Oct. 26. Prices retreated 4.8 per cent this week, and are down 7.4 percent this year on concern that Europe’s debt crunch will curb demand.

During last night’s dinner, the leaders discussed the status of a six-point peace plan for Syria put forward by UN envoy Kofi Annan.

More than a year of violence and sanctions has pushed Syria into an economic slump, with security forces crushing dissent in violation of a cease-fire agreement while the opposition increasingly relies on the tactics of an armed insurgency such as suicide bombings. More than 9,000 Syrians have died since protests began March 2011, according to the UN.

“We are supportive of the Annan plan” but “we agreed that the Annan plan has to be fully implemented, and a political process has to move forward in a more timely fashion,” Obama said today. “We all believe that a peaceful resolution and political transition in Syria is preferable.”

The G8 includes the U.S., Canada, the U.K., Germany, France, Italy, Japan and Russia. The EU also has two seats.

From the G8 meeting in rural Maryland, Obama and other leaders will travel tonight to Chicago for a North Atlantic Treaty Organization summit where a central topic will be a discussion of military issues, including funding and manpower to support Afghanistan after coalition forces leave at the end of 2014.