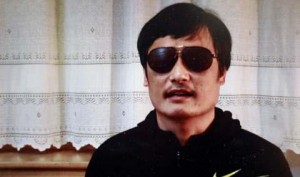 Chen, who is blind, intends to pursue university studies, the U.S. State Department said. His flight to Newark, near New York City, is aboard United Continental Holdings Inc. (UAL) (UAL) flight 88, according to Representative Chris Smith, a New Jersey Republican. The flight is scheduled to arrive at 6:16 p.m. New York time, according to the airline’s website.

Chen was calm as he and his family prepared to leave Beijing, according to a person familiar with the circumstances of his departure. He was comfortable with the decision to go the U.S. for study, said the person who asked not to be named publicly.

“I don’t know when I’ll come back, but I’ll definitely come back,” Chen said in a telephone interview broadcast today by Hong Kong Cable Television.

Chen’s exit resolves a dispute that has complicated U.S.- China relations since he turned up at the American embassy in Beijing on April 26 after escaping detention in Shandong province. For President Barack Obama, running for re-election, it puts to rest an issue over which he has been berated by Republicans.

The U.S. expressed its “appreciation for the manner in which we were able to resolve this matter and support Mr. Chen’s desire to study in the U.S. and pursue his goals,” according to a statement today from State Department spokeswoman Victoria Nuland.

“After years of enduring physical and psychological torture, imprisonment, and hate, the man, Chen Guangcheng, who defended Chinese women from the crime of forced abortion, is finally free,” Smith said in an e-mailed statement.

“Joined by his equally heroic wife, Yuan Weijing, and their children, the Chens will finally get to rest, recuperate, and recover,” Smith said. The New Jersey lawmaker, who has been a public advocate for Chen, called on the Chinese government to “end its deplorable retaliation” against Chen’s friends and extended family members.

“Over the last several days, several of Chen’s relatives and supporters have been arrested and brutally beaten as part of the Chinese government’s refocused retaliation,” Smith said. “They can’t beat him anymore, but they are beating his relatives and friends.”

A spokesman for the Chinese Foreign Ministry in Beijing wasn’t immediately available to comment on Chen’s case. Attempts to reach Chen before the aircraft’s departure were unsuccessful.

“We are relieved that the Chinese government has respected Chen Guangcheng and his family’s legal rights to travel overseas,” Phelim Kine, senior Asia researcher for New York- based Human Rights Watch, said by telephone. “Chen isn’t just one guy, he is a symbol of thousands and thousands of other people who are trying to exercise their legal rights to seek change in what is, in many ways, an abusive status quo.”

Chen was imprisoned for four years and then was kept under house arrest in Shandong province after initiating a class- action lawsuit against forced abortions and sterilizations involving village women.

The activist escaped his confinement last month and fled to Beijing, where he was given shelter at the U.S. embassy days before Secretary of State Hillary Clinton and Treasury Secretary Timothy F. Geithner arrived for annual talks on U.S.-China cooperation.

Negotiations over Chen’s future drew attention to human- rights violations and threatened to derail the high-level meeting. After initially departing the embassy with a Chinese promise that he would be allowed to live freely in China, Chen said he had changed his mind and wanted to go to the U.S.

A deal was reached for Chen to apply for a passport and accept an offer to study law at New York University.

“I look forward to welcoming him and his family tonight, and to working with him on his course of study,” Jerome A. Cohen, co-director of the U.S.-Asia Law Institute at the New York University School of Law, said today in an e-mailed statement.