A bomb exploded on Saturday outside an Italian high school named after the wife of an assassinated anti-Mafia prosecutor, killing one student and wounding at least seven others, officials said.

There was no immediate claim of responsibility, and police were trying to determine who had planted the bomb. But an anti-Mafia prosecutor said it didn’t appear to be the kind of attack that organized crime has carried out in Italy. The bombing also followed a spate of attacks against Italian officials and buildings by a group of anarchists.

The device went off a few minutes before 8 a.m. in the Adriatic port town of 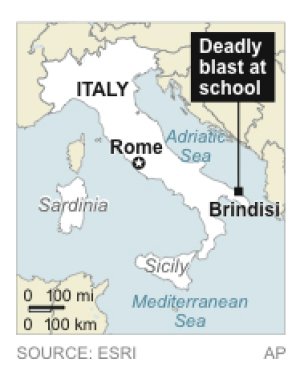 disi in the country’s south just as students milled outside, chatting and getting ready for class at the mainly all-girls Francesca Laura Morvillo Falcone vocational institute. Saturday is a school day in much of Italy.

The school — which prepares students for jobs in fashion, tourism and social services — is named in honor of Morvillo, a judge who died along with her husband, anti-Mafia prosecutor Giovanni Falcone, in a 1992 highway bombing in Sicily by the Cosa Nostra.

The student killed by the bomb was Melissa Bassi, 16, known to her friends in Brindisi for her sunny smile and dream of becoming a fashion designer, said Franco Scoditti, the mayor of the nearby town of Mesagne. She died of her wounds at a hospital, said Brindisi civil protection agency official Fabiano Amati.

One of the shaken students who witnessed the attack told reporters that a wounded girl, her hair charred, screamed the name “Melissa, Melissa” when she realized her friend was severely hurt. Bassi, along with several friends, had just gotten off a bus from Mesagne that took them to their school.

Amati said at least seven students were hospitalized, but some news reports put the figure at 10.

Graziella Di Bella, the health director at Perrino Hospital, said most of them suffered burns and shrapnel-like wounds, and several were undergoing surgery.

“The explosion sent out fragments and flames … pieces of iron,” Di Bella told Sky TG24 TV. She said four psychologists were working with the students. “One of the (injured) girls asked me: ‘What do we have to do with this?” Di Bella said, adding the students were feeling a sense of “disorientation, terror” and anger.

“It’s pure terrorism,” said Italy’s national anti-Mafia prosecutor Piero Grasso after consulting in Brindisi with investigators. He sounded angry as he left the scene of the bombing. “May no one touch our kids!” he shouted as he got into a car.

Dr. Paola Ciannamea, a Perrino Hospital physician who helped treat the wounded, told reporters that one of them was a teenage girl who was in a grave but stable condition after surgery.

Premier Mario Monti, from the sidelines of the Group of Eight summit in the United States, said he hopes the wounded quickly recover.

Anti-Mafia prosecutor Cataldo Motta, based in the nearby port of Lecce, told reporters there were no claims of responsibility. He added that the bombing didn’t appear to be the work of organized crime, since fuel and not dynamite, the Mafia’s traditional choice of explosive, was used. Motta said the “international terrorism” angle was unlikely, but stressed that investigators had not ruled out any hypothesis.

Italy has been marking the 20th anniversary of the attack on the Sicilian highway that killed the prosecutor and his wife, but it was unclear if there was an organized crime link to Saturday’s explosion.

Interior Minister Anna Maria Cancellieri, in charge of domestic security, said she was “struck” by the fact that the school was named after the slain hero and his wife, but she cautioned that investigators at that point “have no elements” to blame the school attack on organized crime.

“It’s not the usual (method) for the Mafia,” she told Sky in a phone interview. The Sicilian-based Cosa Nostra usually targets specific figures, such as judges, prosecutors, turncoats or rival mobsters in attacks, and not civilian targets such as schools.

Saturday’s bombing is an attack of “unprecedented cruelty. The big problem now is to get intelligence” on the bombing, said Cancellieri.

Outside the school, textbooks and notebooks, their pages fluttering in the breeze, and a backpack littered the street near where the bomb exploded. At the sound of the blast, students inside the school ran outside to see what had happened.

Officials initially said the bomb was in a trash bin outside the school, but later the Italian news agency ANSA said the device was placed on a low wall ringing the building and near the bin. The wall was damaged and charred from the blast. Sky TG24 said the device included three containers of fuel.

The school’s principal, Angelo Rampino said the bomb, which reportedly had a timer component, went off at a time when students are known to be flocking to school. “It was done to kill the girls,” said Rampino .

The bombing follows a spate of attacks against Italian officials and government or public buildings by a group of anarchists, including the shooting and wounding of an official from a nuclear engineering firm, which is part of a state-controlled company. An anti-nuclear anarchist group that previously had targeted Italy’s tax collection agency claimed responsibility for the shooting.

Authorities have said the Italian anarchists have worked in close contact with Greece-based anarchists. Brindisi is a major point of departure for ferries between Italy and Greece, but there was no immediate indication from investigators of any Greek link.

The attacks and threats lodged against authorities prompted the government earlier in the week to assign bodyguards to 550 individuals, and deploy 16,000 law enforcement officers nationwide.

Brindisi is a lively port town in Puglia, the region in the southeastern “heel” of the Italian boot-shaped peninsula. An organized crime syndicate known as the Sacred United Crown has been traditionally active there, but crackdowns have been widely considered by authorities to have reduced the organization’s power.