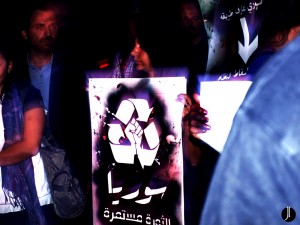 Graffiti, from amorous notes to political slogans, is common in Beirut, adding streaks of colour – mainly to the walls of car parks, tunnels and long-abandoned houses in the capital.

There is no law against the spray-painting of walls, and the practice is largely tolerated by local authorities – at least until recently.

Lebanese painter and poet Semaan Khawam was the first offender, spray-painting an image of a faceless soldier with a gun on a wall in the east side of the capital in full view of a police officer.

In early February, Khawam was charged with disrupting public order and is due in court for his second appearance in June.

Last month, the military police detained activists Ali Fakhry and Khodr Salemeh for stencilling an image in support of the Syrian uprising. The offensive picture was of a recycled sign with the words “Syria: The Revolution Continues” written in Arabic.

According to Salemeh, the image was at once a message of support for the Syrian opposition and an encouragement for the opposition to “cleanse itself of the sectarian division within it”.

The Syrian issue is particularly sensitive in Lebanon, where political coalitions are largely framed by their opposition to or support of the Syrian government. The March 8 group, a loose coalition which includes the pro-Damascus Shia parties Hezbollah and Amal as well as the Christian FPM, currently heads the government.

According to their own account, Fakhry and Salemeh were taken to four different military and security institutions and interrogated.

“Because we hadn’t done anything illegal, they made up the excuse that we had tried to evade a military checkpoint to keep us overnight,” Salemeh said.

Meanwhile, when news of the pair’s detention reached fellow activists, they demonstrated outside the Internal Security Forces building and sent messages on Twitter to several politicians, including Prime Minister Najib Mikati, asking to have the men released.

According to Ayman Mhanna, director of the regional press freedom organization Samir Kassir Eyes (SKEyes), it was thanks to this sustained pressure that the pair was released within 24 hours.

The clamping down on graffiti is a concern for Mhanna, who sees street art as a means for ordinary citizens to express themselves as the law permits.

Writer and activist Fadi Toufiq shares this view. “Newspapers in Lebanon only present the view of the political institution that funds it,” he said. “Graffiti, like blogs, allow citizens who don’t subscribe to a particular political party to share their opinions.”

Together with other activists, Toufiq organised a “Day of Free Expression” earlier this month in which some 200 participants took turns spray-painting slogans and stencilling images on walls in Beirut’s Hamra quarter, including the ones which Khawam, Fakhry and Salemeh were detained for.

Although the majority of images were apolitical or criticisms of the government for its failure to provide adequate services, there were political slogans supporting protesters in Syria, Bahrain, Saudi Arabia and elsewhere in the region.

On the divisive issue of Syria, Salemeh said that there was no conflict between artists supporting one side or another.

“One person would write in Arabic, ‘Down with Bashar’ and another would add a word changing it to mean the opposite,” Salemeh said. “There was no conflict because it was not about politics; it was about the right to express oneself.”

As for his own pursuits, although Salemeh signed a document saying in front of security officials to the contrary, he said he will continue to express himself through graffiti images. “After all,” he said, “it is my civic right.”