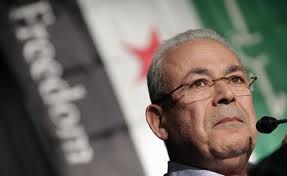 The head of Syria’s most-recognized opposition bloc, Burhan Ghalioun, has announced that he is stepping down as leader of the Syrian National Council (SNC) after mounting criticism of his leadership.

“I am announcing my resignation as head of the Council. I call on the Syrian opposition to break the cycle of conflicts and preserve unity,” Ghalioun told Al Arabiya.

“I declare my resignation as soon as a replacement is found through elections or consensus,” Ghalioun added.

On Tuesday, Ghalioun was reelected head of the exiled coalition in the face of opposition by some members of the secretariat and rules that require the president’s rotation every three months.

Opposition activists had spoken of the “deteriorating situation in the SNC” when the Local Coordination Committees (LCC), a network of activists on the ground in Syria, threatened on Thursday to pull out of opposition bloc the Syrian National Council over its “monopolization” of power.

“The deteriorating situation in the SNC is an impetus for us to take actions, which could begin with a freeze (of LCC membership in the SNC) and end with a withdrawal if errors are not solved and demands for reform go unmet,” the LCC said in a statement.

These “errors” were “a total absence of consensus between the SNC’s vision and that of the revolutionaries”; “a marginalization of most (LCC) representatives”; and “a monopolization of decision-making by influential members of the executive bureau.”

The SNC was particularly criticized for not sufficiently coordinating with activists on the ground, and for the strong influence wielded by Syrian Muslim Brotherhood representatives.

Most opposition forces agreed in March, after laborious negotiations, that the SNC would be the “formal representative” of the Syrian people, despite calls for its restructuring.

The move came in response to calls from the international community that the Syrian opposition must unify its ranks.

Ghalioun’s reelection mandate was intended to last three months. His reappointment came after a 72 hour long-drawn-out and hardly-fought meeting of the representatives of the major SNC forces in a hotel in the center of Rome.

Ghalioun, who is a professor and lives in Paris, was not new to Syrian uprisings; in fact he returned to the scene in 2011 picking up from where he left off.

Ten years ago, he participated in the Damascus Spring, a period of intense political debate after the death of President Hafez al-Assad, in June 2000, and which continued to some degree until autumn 2001, when most of the activities associated with it were suppressed by the government.

Rafif Jouejati, English-language spokeswoman for the Local Co-ordinating Committees in Syria, criticised the leadership of the opposition Syrian National Council as ineffective, unaccountable, and out of touch with the demands of protesters.

Jouejati said that under the leadership of Burhan Ghalioun the SNC had failed to lobby for international intervention as protesters have demanded.

In an interview with the Guardian she said:

Explaining the LCC’s decision to threaten to withdraw from the group, Jouejati said: “The SNC is not operating in the true democratic principles it promised when it was initially formed. Our issue is that major decisions are being taken by a select group of people at the executive levels without regard to the remainder of the SNC.”

She conceded that LCC’s threat of withdrawing from the SNC “may appear to make divisions” in the opposition worse. But she claimed it was a “healthy” development because it showed the opposition was beginning to understand what they wanted. She said:

In the past we have only been able to say what we don’t want. Now we are able to articulate much more clearly what we do want. The differences will be resolved. This statement from the LCC is a wake up call. The SNC is going to need reorganise itself.

Speaking before Burhan Ghalioun announced his resignation, she said: “He was elected by a small number of people within the SNC. I’m not sure his re-election reflects the general desires of the SNC membership. The SNC needs to reassess its priorities and its decision making processes. If they wish to be an inclusive umbrella organisation they will need to reflect their constituency. Right now they are not.”

Ghalioun had failed on the three fronts: internationally, achieving consensus within the council and demonstrating transparency, Jouejati said. “Many of the financial dealings are still a mystery,” she said.