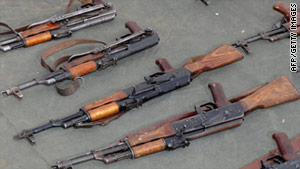 A confidential U.N. report reveals Iran is exporting arms to the Syrian government in violation of a ban on weapons sales, the same day President Bashar al-Assad blamed the violence in his country on the work of foreign-backed fighters.

The draft report describes three seizures of Iranian weapons shipments, including two bound for Syria, within the last year, a Western diplomat told CNN on Wednesday on condition of anonymity. The official was not authorized to release details to the media.

The report was drafted by a panel of experts and submitted to the U.N. Security Council’s committee that monitors sanctions against Iran, the official said.

The revelations came as al-Assad, in a rare interview, told Russia 24 that weapons in the hands of rebels were flowing into the countryfrom neighboring Lebanon and Turkey.

“You can’t simply close the borders and stop the smuggling, but you can reduce the flow,” he said.

In recent days, violence has spilled over into Lebanon and Turkey where thousands of Syrians have fled. At least one person was killed and an undetermined number were wounded Thursday in renewed clashes in the northern Lebanese city of Tripoli between factions supporting and opposing the uprising in Syria, Lebanon’s National News Agency reported.

Al-Assad put the blame instead on the so-called Arab Spring that saw popular revolutions topple the governments of Egypt, Libya and Tunisia.

“If we take into consideration the developments in Syria, the events in Libya and other countries, for the leaders of these countries, it’s becoming clear that this is not ‘Spring’ but chaos.”

The successful Arab Spring movements inspired the uprising in Syria that began in March 2011 with protests calling for political reforms and quickly devolved into a revolt with an armed opposition amid a brutal crackdown by al-Assad’s forces.

The United Nations estimates that at least 9,000 people have died in the 14-month crisis, while opposition groups put the death toll at more than 11,000.

CNN cannot independently verify reports of deaths and violence because the Syrian government has severely restricted access by international media.

At least four people died Thursday when Syrian forces opened fire in Daraya outside the capital city of Damascus, the Local Coordination Committees of Syria, an opposition network that collects casualty reports and organizes anti-government protests.

Al-Assad blamed the violence on terrorists, including those who labeled themselves members of the rebel Free Syrian Army.

But opposition groups, including members of the rebel army, say al-Assad’s government has been trying to mar their efforts with false accusations of links to terrorism.

While the rebel army says its ranks are populated by those who defected from Syria security forces, al-Assad labeled them criminals.

“It’s not an army, first of all, and it’s not free because they get their arms from different foreign countries,” he said in the interview.

“That’s why they are not free at all — they are a bunch of criminals who have been violating the law for years and have been sentenced in various criminal cases. There are religious extremist elements among them, like those from al Qaeda.”

Al-Assad dismissed the enormous international pressure put on him to end the violence and step down, vowing that Syria would not bow on any issue.

The United States, the European Union and the United Nations have targeted Syria with a number of economic sanctions targeting al-Assad and his government.

Al-Assad acknowledged the sanctions have had an adverse affect on Syria’s economy.

“The world doesn’t consist just of Europe and the United States, and we find alternatives which allow us to overcome these difficulties. We can support small and mid-sized business, the basic element of our economy is agriculture, and it’s hard to affect it with sanctions,” al-Assad said.

Al-Assad also called a boycott of recent parliamentary elections by the opposition a failure.

“It seems to some people that if we conducted the reforms earlier, the situation would have been better now. It’s not right for one reason — terrorists spit on reforms. They are not fighting for reforms, they are fighting to bring terror,” he said.

Meanwhile, the U.S. government distanced itself from a Washington Post report that said more and better weapons are making their way in to the hand of Syrian rebels.

The newspaper, citing unnamed officials and opposition activists, reported the arms are being paid for by Persian Gulf nations and coordinated in part by the United States.

“The United States has made a decision to provide nonlethal support to civilian members of the opposition,” Victoria Nuland  , a State Department spokeswoman told reporters Wednesday.

The United States has expressed reservations about arming rebels, citing division among the opposition.

Meanwhile, division among Syrian opposition groups deepened Thursday with the Syrian National Council, widely perceived by Western countries as the primary coalition for the opposition, coming under fire by a leading opposition activist group.

The Local Coordination Committees of Syria, an opposition network, called the national council a “failure,” saying it will withdraw from the council. The council has been under fire for failing to unify the opposition groups and bring in international support.