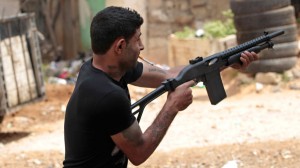 Five people were killed and more than 70 wounded in clashes between Alawite supporters of  Syrian President Bashar al-Assad and Sunni Muslims in the Lebanese city of Tripoli, medical sources said on Monday.

Tension between the Alawite and Sunni communities in Tripoli has been fuelled by the unrest in neighbouring Syria where Assad seeks to crush a 14-month-old revolt that began with largely peaceful protests but has become increasingly militarised.

Assad is from the Alawite sect, an offshoot of Shi’ite Islam whereas the revolt has been led by the majority Sunni Muslims.

A small Alawite minority is concentrated in Tripoli, a conservative Sunni city where many residents have been enraged by the Syrian government’s crackdown.

Clashes began late on Saturday and three people were killed at the weekend in the city’s Alawite enclave and surrounding Sunni Muslim neighbourhoods.

The fighting in Tripoli, 70 km (43 miles) from Beirut, highlights how sectarian tensions in Syria can spill into Lebanon. Buildings in the area are still riddled with bullet holes from similar clashes earlier in the year.

Islamist groups and officials were meeting in Tripoli on Monday to try to solve the crisis.

“So far there is no agreement to deploy the army. They are afraid of creating another conflict between the army and the fighters,” said one cleric at the meeting, who asked not to be named. “I’m worried the problems here in Tripoli will only spread until they agree on doing something.”

Among the deaths at the weekend was a soldier hit by sniper fire. Sporadic fighting also took place between armed Sunnis and the Lebanese army near a main Sunni district, and security sources said military has been reticent to become dragged into the conflict.

Tension in Tripoli had been rising over the detention of Islamists and clashes started after police broke up a sit-in against the arrest of Shadi al-Moulawi.

A court on Monday charged Moulawi for involvement with an unnamed terrorist organisation. He will be sent for a military trial, a court source said.

Lebanon’s porous border has been used by supporters of the Syrian uprising to smuggle arms and supplies to the opposition.

Islamists say Moulawi was working with refugees who had fled to Lebanon. A statement by al-Jamaa al-Islamiya, an Islamist group in Tripoli, criticised his arrest as lacking due process. Police said he was arrested after thorough surveillance.