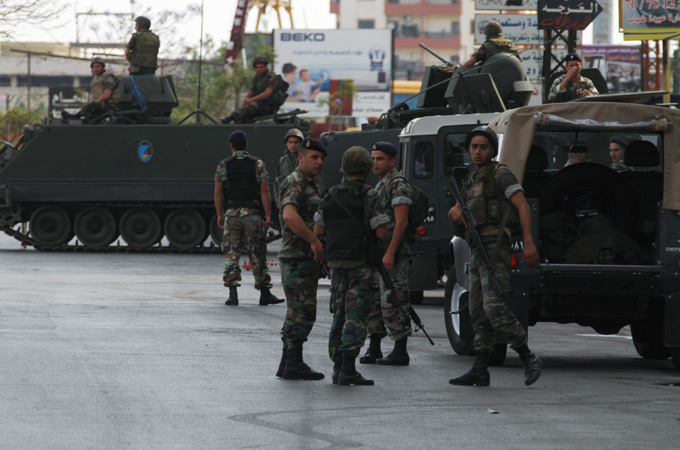 At least four people have been killed, and another 24 injured, after fighting erupted overnight in the Lebanese city of Tripoli between residents loyal to Syrian President Bashar al-Assad and those supportive of the Syrian opposition, witnesses and security officials have said.

Rocket-propelled grenades and automatic rifles were used in the fighting in an Alawite enclave and surrounding Sunni neighbourhoods in the port city, 70km north of Beirut, the capital.

“The clashes peaked at dawn. The sound of gunfire is still echoing in the city,” a Lebanese security official said.

The fighting underlines how tensions in Syria could spill over to neighbouring Lebanon. Clashes are common between the two sects in Tripoli.

Lebanon’s National News Agency reported that a sniper shot dead a Lebanese soldier while he was inside a car in Tripoli early on Sunday morning.

Clashes broke out on Saturday night between the army and a group of young Islamists, who were demonstrating in Tripoli for the release of a terrorism suspect, another security source said.

Gunfire first erupted between the Islamists and the army as the youths, sympathisers with the ongoing revolt in Syria, tried to approach the offices of the pro-Assad Syrian Social Nationalist Party.

About 100 young men, mostly Islamists, blocked the northern and southern roads into Tripoli, setting up camp at the southern entrance of Lebanon’s second city.

Black flags bearing the words “God is Great” were planted alongside the Syrian flag of independence, a symbol of revolt in the neighbouring country.

“We will not leave until my brother is released,” said Nizar al-Mawlawi, whose 27-year-old brother Shadi was arrested by Lebanese security forces.

According to a statement from the security services, Shadi al-Mawlawi was arrested as part of an “investigation into his ties to a terrorist organisation”.

Syrian authorities have charged that arms and fighters are being smuggled in from Lebanon to help those fighting to overthrow Assad.

Lebanon is divided between the March 14 camp, backed by the US and Saudi Arabia, and which is hostile to the Syrian regime, and the March 8 camp, which dominates the government and is supported by Syria and Iran.