They underscored the importance of “refraining from making any changes to the site,” as well as their commitment “to keeping the [archeological site] in its original location .” 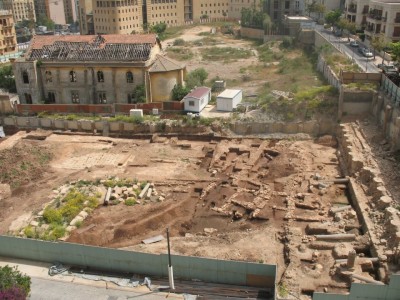 Discovered in 1988, the Roman Hippodrome in Beirut is situated in Wadi Abou Jmil, next to the newly renovated Jewish Synagogue in Downtown Beirut. This monument, dating back for thousands of years, now risks to be destroyed after Layoun , who represents Free Patriotic Movement in the Hezbollah dominated cabinet gave the green light last March for construction over it.

The hippodrome is considered, along with the Roman Road and Baths, as one of the most important remaining relics of the Byzantine and Roman era. It spreads over a total area of 3500 m2.

Former minister Salam had issued a decree banning any work on the hippodrome’s site, effectively protecting it by law. Warde did not contest the decree.

The Roman Hippodrome in downtown Beirut is reportedly considered as one of the best preserved not only in Lebanon, but in the world. It is also the fifth to be discovered in the Middle East according to media reports

The hippodrome is considered, along with the Roman Road and Baths, as one of the most important remaining relics of the Byzantine and Roman era.

FPM leader MP Michel Aoun, defended his minsiter’s position last March by saying that: “there are a lot of discrepancies between Solidere and us. Therefore, a minister from our party cannot be subjected to Solidere. Minister Layoun found a way, which is adopted internationally, to incorporate ancient sites with newer ones… So I hope that media outlets do not discuss this issue in a way that would raise suspicion.”