Hezbollah says able to strike any target in Israel 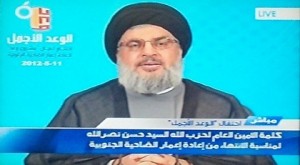 Hezbollah chief Sayyed Hassan Nasrallah made another appearance via video link on the occasion marking the completion of the Waad Project for the reconstruction of Dahiyeh buildings destroyed by the 2006 war with Israel.

“The objective of the July War was to crush the Resistance and subjugate Lebanon as part of preparing the ground in the region for the creation of the New Middle East.” He said and warned that his militant group was capable of striking any target in Israel, saying “the days when we fled and they did not are over”.

“Today we are not only able to hit Tel Aviv as a city but, God willing, we are able to hit specific targets in Tel Aviv and anywhere in occupied Palestine,” Nasrallah said in his televised address.

In addressing the domestic situation he reiterated his support for an electoral law based on proportionality:

“At the national level and if we want all segments of society to be represented in parliament and if we want to be fair and just, a law based on proportional representation would be the best because it would not eliminate anyone.”

He said “Any electoral law would preserve the size of Hezbollah’s parliamentary bloc”.

Turning to the concerns over Hezbollah arms and its possible use for political gain he said:

“The weapons that can affect the elections are the individual firearms and all parties have such weapons.”

He reiterated his support for holding the 2013 elections on time.

Addressing the situation in Syria Nasrallah who supports the Syrian regime asked : “Who wants the destruction of Syria? America and Israel and some Arab countries. They want to destroy Syria because it is the main ally of the resistance in Lebanon and Palestine.”

“Some are saying that Lebanon’s Hezbollah is trying to inflame the situation in Bahrain. They are lying. We only support the peaceful protests which have undermined the al-Khalifa regime,” he said

His speech comes a day after A group of South Lebanon residents issued a statement on Thursday expressing their disappointment with Hezbollah for not fulfilling its promises over assisting them financially in reconstructing their homes, which were destroyed during the 2006 July War with Israel.

The resident said that they were disappointed over the Shiite party’s effort in the South.

“We were certain that Hezbollah Secretary General Sayyed Hassan Nasrallah will keep his promise and task the Jihad al-Binaa [Company] with reconstructing our houses regardless of the cost, but we were deeply disappointed.” The group said in a statement.

The statement was signed by “the people of the [destroyed] villages in South Lebanon.” 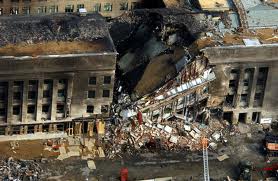 The 2006 war between Hezbollah and Israel devastated the whole country. Over 1200 Lebanese were killed mostly civilians , the Lebanese infrastructure was devastated , over 1 million became homeless , mostly Shiites from the south and over 120, 000 housing units were destroyed mostly of Shiite residents in south Lebanon and southern Beirut suburbs. The damages were estimated by UN at over $15 billion.

As soon as the 2006 war started Nasrallah appeared on TV and announced that Iran will pay for rebuilding whatever is destroyed in the war with” Halal” money. But the Halal money never showed up. Instead of putting pressure on Iran to deliver on its promises Hezbollah and its allies occupied downtown Beirut and tried to overthrow the government for not paying quickly enough for rebuilding the south. They forced the Lebanese government which is heavily indebted to borrow more money to help rebuild what was destroyed during the 34 day war. It appears from today’s statement of south Lebanon residents that Hezbollah has decided to keep some of the the funds it received from the Lebanese government.